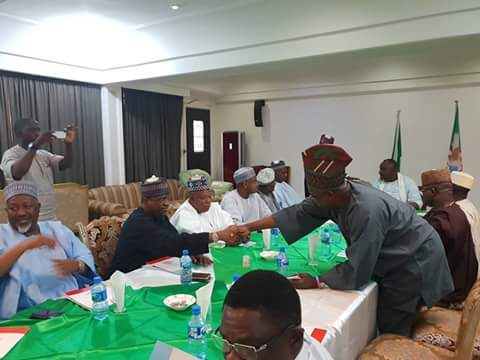 The National Working Committee (NWC) of the ruling All Progressives Congress (APC) has agreed to adopt direct primaries to conduct elections that will produce Presidential, Senate, House of Representatives, Governorship and State House of Assembly’s candidates ahead of 2019 general elections, a reliable party source told Daily Hint last night.

The source, who said that there was no dissenting voice among the NWC members, added that the decision was taken to last night’s meeting of the party’s National Caucus to be attended by President Muhammadu Buhari, Vice President Yemi Osinbajo, the APC National Chairman, Comrade Adams Oshiomhole.

All members of the NWC agree to adopt direct primaries. That is what is taken to the National Caucus. You know that some governors like that of Ogun and Ondo do agree to it. So, it may have to be subjected to voting. You know that it is not all members of the National Executive Committee (NEC) are members of caucus. However, the caucus will decide what will happen at NEC meeting tomorrow (Thursday). But there is no divided opinion among the NWC members,” the source said.

The Acting National Publicity Secretary, Mr Yekini Nabena, did not answer his calls when Daily Hint tried to make an enquiry about the outcome of the meeting.

However, it was gathered last night that those opposing the method were still very strong in their decision.

Sources said the opponents were wondering how the party would coordinate an election mode that would involve millions of party members across the country, considering the logistics involved at a time the party was just registering new members.

What Oshiomhole once said about direct primaries. The APC National Chairman, while justifying the reason for direct primary for Osun State governorship election, said, “Regardless of who wins the primary, we hope that the rest of them will support the person to ensure that we do our best to retain the governance of Osun State.

We have decided that in order to ensure popular participation, and to deepen democracy in Osun State, in line with the provision of our party constitution which allows for either direct or indirect primary, we have resolved that the governorship election primary in Osun state will be conducted on the basis of direct primary.

“What that means is that every card-carrying member of our party will participate in the process of nominating the flag bearer of the party. This for us, is the most democratic way to conduct election and is in line with what our critical stakeholders from that part of the country want and we are quite happy to oblige.