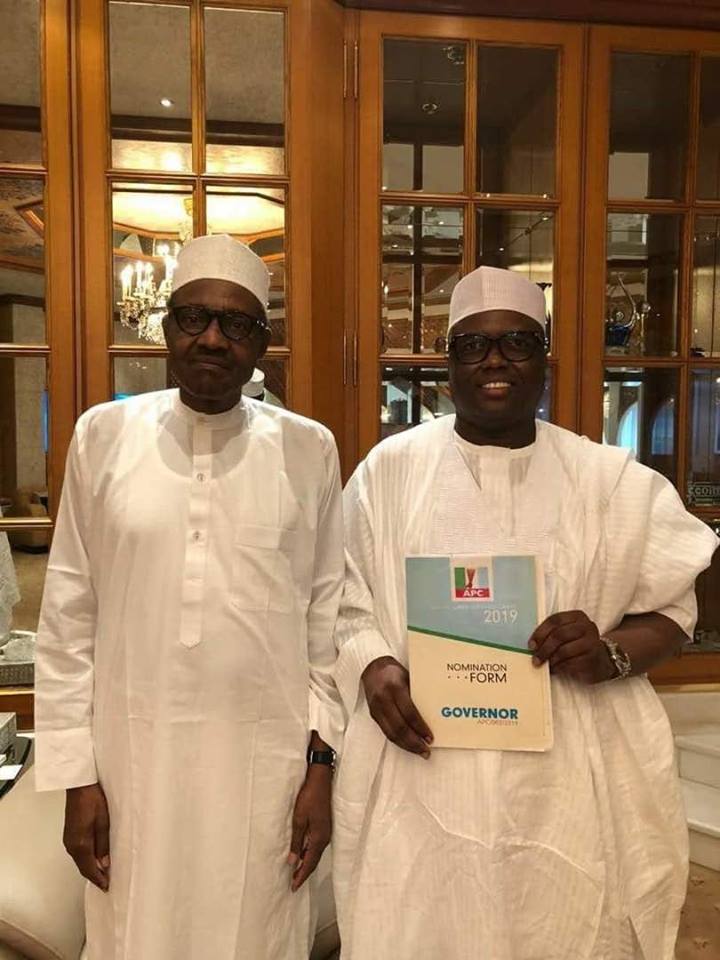 The expression of intent under and the purchase of APC nomination form for Adamawa state gubernatorial race by Dr. Mahmood Halilu known as Modi, has apparently suffocated Governor Muhammadu Umaru Jibrilla Bindow’s camp to a discomfort level, which necessitated blabbering like speaking in tongues.

Intimidated by what a picture photograph could get to symbolise based on the window opening for different interpretations, the governor’s supporters who initially boasting that Bindow would be unbeatable owing to his impressive performances implying good governance, having been boiled to a decimal point, bursted with outrage, seemingly accusing President Muhammad Buhari of boosting Modi’s popularity, defining it as partiality against Bindow when it ought to be 4+4 to receive the blessings of PMB even when the directives of the latter to settle outstanding salaries of public servants in the state with the bailout and Paris club funds were not humbly honoured.

The picture photograph in which Modi the gubernatorial hopeful, holding his APC nomination and expression of intent form,
posed with President Muhammadu Buhari that went viral on social media, was to Bindow 4+4 group, suggestive of opened presidential support, counted as typical of nepotism.

Modi, the Bidow group noted, was a brother-in-law to Buhari. The group’s discomfort was said to have started when the APC’s NEC insisted on direct primaries in states where the party stakeholders have not thought it otherwise. This was contrary to the expectations of the APC Adamawa SEC, said to have comprised of entirely party members from the Bindow group charged with the responsibility to bring back Bindow, consolidating the philosophy of 4+4

Tension has had it extension connected to an uneasy attention for a cardiac arrest in election terms, capable of causing partial paralysis in politics terms, for a terminal ailment best understood in the vanquished register, when Modi purchased the nomination and expression of interest form indicative of his readiness to wrest the party’s ticket from the incumbent governor given the aesthetic interpretation to go for clueless in administration, which exacerbated after the said picture went viral.

The Hawks wrote that “Bindow’s supporters who were not happy with the development, found it expedient to ventilate their fury against what they glaringly inferred as partiality of the president against their principal despite the governor’s superlative performances in bringing dividends of democracy to the populace.”

In a piece constrained of beauty of form, starved of ethics and marred with bias intended to cause dissension with a rather mockery caption: “DZA ADA ROOM INFLUENCE ON PMB AND THE TRENDING MODI’S PICTURE” published in TGnews of September 8, 2018 floated by a governor’s special assistant claiming to be a journalist, blindly bulldozing devoid of professional boundary, Comrade Musa Usman Terreng one of the supporters of governor Bindow was quoted as saying:

“Well, I am certain that election is not holding in the villa, and Adamawa delegates are very much aware of the efforts of Gov. Bindow and why he deserves 2nd term. Even though am sure this is the handiwork of PMB’s other room custodian.

“But Modi and the PMB’s other room custodian should know that we as Bindows’ are not perturbed with that; and we expect formal Presidential explanations as regards to the trending picture of him and his brother-in-law on social media who is a Governorship aspirant in Adamawa State.

“Because, as far as PMB believes that his second term is timely and purposeful, thus geared towards Continuity for Consolidation then why not also Bindow too?! Or Is Bindow a prodigal Governor?

“To the best of my knowledge, PMB was a ruthless Soldier, and now a critically principled President that should have forecasted the implications of such picture before appearing which ought to have been snapped without Modi holding the nomination form or for PMB to rightly decline the snapshot.

“Anyway time shall tell, even though am optimistic that PMB has no personal interest attached to such picture, aspirant, and candidature as epitomized on his countenance.”

In another angry shot at the president, another supporter of the governor Dr. Gambo Alkali whose views were also published in TGnews indicated that he was pissed off by the presidential nepotistic disposition.

In the piece entitled, “Why president Buhari should be neutral in Adamawa Guber race,” Alkali noted with exasperation that, “I bumped into a very disturbing story and a picture on some news outlets this evening, which necessitated my will to write this piece and advise President Muhammadu Buhari on the need to be politically cautious of such actions.

“In the picture, President Buhari was in a ceremonious mood with his brother-in-law and Adamawa Guber aspirant, Mahmoud Halilu (Modi) after the later picked his expression of interest and nomination form to contest for the Adamawa governorship in 2019.

“Under contrary circumstances, there is nothing wrong with President Buhari taking such picture with his brother-in-law but it is a case of the in-law wanting to run against a man that is more like a son to the President himself, a man that has contributed so much to Buhari’s 2015 & 2019 aspirations, a man who is a loyalist of the President and a man that has transformed Adamawa into a progressive State – Senator Muhammadu Jibrilla Bindow.

“It is an established fact that Adamawa State Governor, Bindow is one of the very few governors in Nigeria who is wholeheartedly committed to President Buhari’s continuity course come 2019. Bindow has continuously worked for the success and progressive of Buhari’s ideals and politics in the state.

“Therefore, it is baffling that President Buhari will agree to such kind of picture with his brother-in-law which may be mistaken for a support stamp to Modi’s aspiration to the detriment of a loyalist like Bindow and all well meaning individuals in the APC will feel bad about that picture because as it is Modi is not even a candidate the President will want to be associated with.

“The relationship between Bindow and the President has always been warm and amazing. Bindow is known to be more like a son to the President for marital, political and many more reasons. Sani Zangon Daura, Bindow’s father-in-law is a long time and trusted acquaintance of President Buhari – when Buhari (seeked) the hand of Mrs Buhari’s for marriage, it was Zangon Daura who was his shield and pillar for the marriage.

“It is however a big shock that President Buhari will take such a picture with one family member – Modi, who intends to contest against another family member and the people’s choice – Bindow.

“But the warning signs of this misdemeanor came a while ago, when the wife of the president during one of her visits to Yola for a ceremony of her Future Assured Project uttered that come 2019 – ‘Naka sai naka’, which means ‘yours should be yours’. It is surprising how easily Mrs Buhari will forget her close acquaintances with Bindow’s family and In-laws to make such politically reckless statement in public.

“On this note, I wish to clearly advise the President to as a matter of urgency disassociate himself from Modi’s candidacy and clear the air on the circumstance of this picture. President Buhari should be a father to all aspirants close to him in his party, this is no time to tilt towards an aspirant especially an unpopular one like Modi – who is not even fit to win a councilorship seat in Adamawa State.

“Bindow is not perfect and he has his shortcoming as an administrator but the man’s achievements and contributions to the development of Adamawa state is part of the strongest points for his party’s campaign and still is a reference by the APC. His government was prided by many Nigerians as “the face of good governance in Nigeria.” His performance over the last few years won him many accolades.

“I also wish to state that despite the big political (witchhunt) and distractions from the opposition and some people within the party has not lost focus of the real essence of governance, especially in the area of improving the lives of the citizenry by ensuring delivery of infrastructural development that will affect the people both directly and indirectly in Adamawa State.

“Even in the midst of crunched economy, scarced resources and technical recession, Governor Bindow has improved the living condition of Adamawa people through laudable and human development oriented projects. If there is one man who deserves such an open tilt to his candidacy from President Buhari, it’s Bindow.

“Mr President, in politics, blood relations and marital acquaintances matters less, what matters most is the will of the people and what the voters want. It will be disastrous for your popularity and good name if you try to impose any candidate on the people in Adamawa State or any other State as at that.

“Once again, I wish to advise you disassociate yourself from Modi’s aspiration in Adamawa State and issue a clear up on that picture before more damage is done.
God bless you and God bless the Federal Republic of Nigeria.”

DECONSTRUCTION:
However, some political analysts have defined the arguments as creatively incoherent, constrained of political ingenuity and lacking of genuine intention rather than jejune for a trash can.

How could a constructive critic demand for explanation to the impression he submitted was untypical, of and was not the reflection of his criticism?”

A critic argued that the question of family was immaterial to politics where he said:
“Mr President, in politics, blood relations and marital acquaintances (matters) less, what matters most is the will of the people and what the voters want.”

Should this have any backing, why should the critic attach the family of his principal with that of the president? Could it be to attract the sympathy to the one-of-us-ness? It sounds so myopic enough to have political correctional lens recommended.”

Why should an achiever lean on a personality for a mandate rather than winning, without any help, the minds of the electorates with his achievements the composite of which defined good governance?

Buhari can’t decide for the electorates in Adamawa, their governor or representatives, as the sack meant for sak is stashed to capacity with sam, the critic has aged the point. However, why the fuse?

There are other gubernatorial candidates that are getting set for APC primary election, they have not seen this as anything intimidating, why should Bindow act at odd with his colleagues in the race ?

Any politician contesting for political office, making the integrity list, could pose for a snapshot with PMB, it shouldn’t have to be only Modi to have generated meaningless tension suggestive of humbling for a defeat

finally I rest my case.