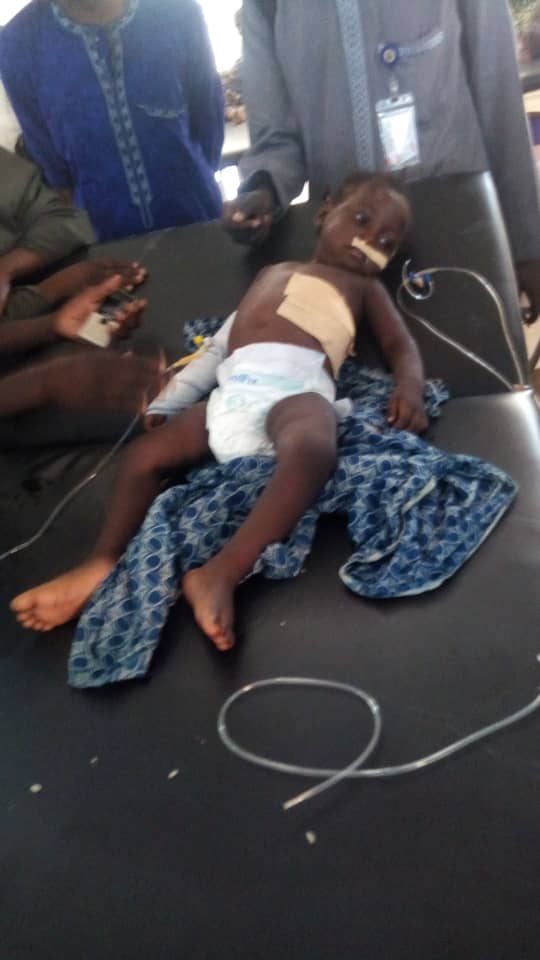 Father’s inhumanity against daughter could be fitting a definition of a tragedy that has befallen little zainab.

Human Right activist could see it as Child Abuse. However, others could not rule out the influence of drugs or simply, madness.

Zainab was two years six months old from broken home. She lived with a sadist as a father at Gurin in Future local area of Adamawa state who could have regretted ever given birth to her.

The father whose name was given for a record at the hospitals where his Zainab was taken to as Manaja, was said to have hailed from Gombe state, his actual town or local government area was not given. He simply settled at Gurin.

Manaja was said to have denied the wife he divorced to go along with her two years old daughter he was eventually never to give good parental care.

After having been divorced, Zainab’s mother was said to have gotten married to another man who would have welcomed his wife’s daughter for a father.

Zainab was taken to the hospital by her maternal uncle, who, as God willed, visited to see how the paediatric baby was coping with father playing double roles.

The paediatric Zainab was found in a pathetic conditions; she has got burns in one of her hands in addition to different degrees of injuries she has sustained from the mistreatment meted to her by her bullying father. There was also a dislocation in one of her legs resulting from rough handling.

Shocked by what he saw, the uncle immediately took zainab to a primary healthcare centre in Gurin where she was being managed for about three days before being referred to FMC Yola.

The health workers at Gurin insisted that the security officer and Zainab’s father must be on ground before they could commence treatment.

Manaja was said to have refused the request until he has had himself arrested by policemen.

Manaja denied that he has mistreated his daughter but could not explain cogently, the reasons for Zainab sustained injuries. He only pleaded that it was the “handiwork of the devil,” by the Manager in Manaja of the devils against daughter indeed.

Investigation revealed that Zainab was treated with hideous cruelty by seeming sadist father simply because she was urinating in a rather apparently unhygenic bed.

Manaja is now said to be under police custody, while Zainab is being managed at the Federal Medical Centre Yola with Hospital Paupers Fund shouldering the responsibility of the treatment.

The fund members, eighteen in number are selected retired public servants people of proven integrity cut across the geopolitical zones of Adamawa state and some members of staff with FMC Yola.

The paupers fund is charged with the responsibility of soliciting for funds from philanthropic individuals and organisations with a view to attending to the hospital needs of the indigent patients and those on emergency care at the health facility.

Over two hundred patients were so far said to have benefited from the fund scheme; ranging from minor treatments to major surgeries.

The activities of the hospital paupers fund is so transparent in the sense that money doesn’t exchange hands. Transactions are carried out fantastically electronically, in tune with the demand digital time. That is why the likes of the former Vice President Atiku Abubakar the Wazirin Adamawa, the OPEC Secretary Sanusi Barkindo and HRH the Lamido Adamawa Muhammadu Barkindo Aliyu Musdafa have key in to the social welfare project, contributing to the health security for the indigent patients. This takes another story.

Meanwhile, why we wish for Zainab a quick recovery, it is hoped that justice against Child Abuse will take its decisive cause.