“The sitting governor could be defeated. It is however so difficult to take him out of 18 at the preliminary stage, talking about the party primaries, unless otherwise the candidate’s IQ is less than a moronic moron.”

Panicked by the perception that the Northern senatorial zone of Adamawa state is taken as much as the home based central zone with Hong taking the lead.

The pessimist nursing the fear of what would amount to getting beyond his reach, losing the grip, Bindow who went soliciting for mandate in Mubi his hometown, his polling unit, was alleged to have resorted to deploying the politics of tribal sentiment, typical of the deceit to attract sympathy for a divide and win by the misfit in creativity; a display of extreme intellectual deficiency impoverished of critical thinking and strategic planning. 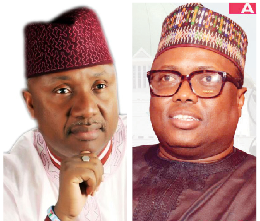 “Modi came before Bindow. Modi seemed so sincere with his promises. He lamented lack of payments of salaries and other arrears of entitlements, which subject public servants with local government authorities and primary healthcare centres to abject poverty, as least among untold hardships: the rot in education and healthcare in addition to siding with injustices in matters relating to monarchy in the zone. He assured that these could be fixed with a view to restoring public confidence in governance.

“Modi, did not accuse any tribe for subjugation. He did not complain against alienation or marginalisation. He summarily, did not take tribal hate as theology to evangelise; a manifesto of the misfit to getting mandate. His was simply an issue based campaign, soliciting for support. A critical thinking, if you asked me.

“We heard him. The stakeholders are persuaded that Modi’s mission is aimed at people’s progressive interest. It is not meant for deception but to challenge the public lies in such a way that Adamawa would not be tagged as a republic of liars basing its capital in the city of deception. A strategic thinking, if you asked me,” one of the electorates would reveal to the Periscope Global Investigate.

Bindow was alleged to have accused the Fulani hegemony, ganging up to deny him another mandate chiefly because he was not of the tribe. He was therefore, said to be advocating for tribal sentiment, soliciting for the non Fulani to rally round him.

Should the allegation hold water, the aspirant would be playing it dirty and the filthy outcome would be an offensive the stench to bear.

Political analysts have however articulated that governor Bindow was the architect of his problems. He made so many promises and has broken them. He relegated to the background, the delegates that would not betray him even when they were promised by his opponent more than he could afford to financially lure them during the 2015 gubernatorial primaries. He betrayed the electorates at the grassroots as well.

“The Fulani are innocent. They are independent of his problems: Does non payment of salaries have anything to do with the Fulani conspiracies or alliance against him? How about dysfunctional healthcare and educational rot in the state, the question of social welfare, the youth and women empowerment, and the skills acquisition centres that were left abandoned?

“The integrity of the Mubi Emirate Council is politically put on trial with the pending case of the monarchy in Michika, governor Bindow would also not honour the court order that restored the legitimacy of the monarchy in Maiha, adding insult to injury, the governor recently directed the Mubi Emirate Council to dethrone the Sarki Matasa Mubi. The actions are interpreted to be unhealthy to monarchy as a religious and cultural heritage.

“Bindow has the resources, he has the authority but he lacks people’s support. It’s all about clueless rather than the Fulani thing. Why screaming predator when it would only serve to those with cinematic appetite?” An electorate would argue.

Had Bindow sponsored at least five of his loyalists to also contest for governorship, the consensus based on number of delegates representing each of the gubernatorial candidates would have been a brilliant strategic thinking; the national secretariat would have generated more funds from the sales of forms from the state, six would have been greater than two put together rather than challenging the Oshuomhole to stop selling or admitting more party members, a critical thinker would remark.

Having failed to think along the strategic line, it would then not be comfortable the information that Malam Nuhu Ribadu and Dr. Mahmud Halilu Ahmad known as Modi PMB’s brother-in-law were negotiating an alliance for the primaries Sunday, against Bindow. It would mean two against one.

The rumour if news of the alliance, was said to be amazingly generating delegates’ support, moving for Modi’s mandate.

It was not to be at ease the tension even when the Ribadu faction was reported to have repudiated the reports of the rumoured alliance as an act of desperation.

The used and dump delegates who nursed the pains of the previous neglect by the governor- having said to be advised by a media aid, to carry along the guys who initially found a vocation in attacking his leadership style via social media by means of SA allowance for Napoleonic like ferocious tamed dogs of war as satirically articulated by George Orwell in “Animal Farm”, to however unconstructive, lampoon and lambaste the analysands of what should have been good governance, however, running out of credibility as a “gross distortion of truth”- nurtured the adage that once beaten, twice shy. Arguing that Sunday would be a payback time for the to be trusted like a fox to be humiliated.

Bindow was however said to have admitted some weaknesses in his government associated with him being human. He has assured that he would take correction if given the second chance.

The sitting governor could be defeated. It is however so difficult to take him out of 18 at the preliminary stage, talking about the party primaries, unless otherwise the candidate’s IQ is less than a moronic moron.

“Should APC want to lose Adamawa, let the delegates humiliate their consciences in betraying the card carrying members by attempting to bring back Bindow. The guy has overstayed his welcome. He should therefore have to leave,” an electorate would say.

“My comment will be immaterial, my counter action will speak louder, responding to the action of the delegates at the APC gubernatorial primaries tomorrow

Member Representing Bindow’s Constituency Urges Delegates To Vote Him Out