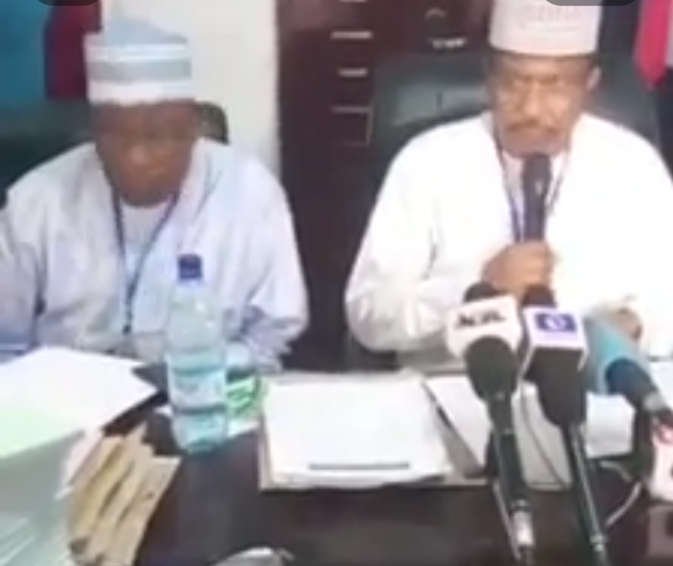 * It’s a Michael Jackson-a-tion in cinematic terms, of the primary election – Literary critic

*The defeat of APC in Adamawa is definitely defined * ADC, PDP supporters

The Jibrin Ahmed led electoral committee assigned to conduct party primaries by the APC NWC in Adamawa state, has on Saturday, declared Bindow Jibrilla as the winner of the highly disputed gubernatorial primaries.

Announcing the result of the primaries at the APC secretariat in Yola, Jibril the chairman APC primary electoral committee said Bindow Jibrilla polled 193,656 votes to defeat his fellow contestants.

Ahmed announced that Dr. Mahmood Halilu Ahmed Modi, made 15, 498 votes while Malam Nuhu Ribadu rounded up the exercise with 7,705 votes to emerge as the third best.

The highly disputed primaries has witnessed altercation between Bindow and his opponents following the alleged massive irregularities that led Ribadu and Modi to reject the conduct of the election as not a reflection of the transparency and fairness associated with the party’s internal democracy, known to be devoid of any act that would question the credibility of the conduct marred with irregularities, coining the similitude by a poet to the incidence in which malt, was by the chronic corruption, marred with water.

Modi and Ribadu, have jointly in separate remarks, condemned the conduct of the party primary election, alleging that it was staged managed, it was not held across the state and that it was a thriller depicting deception and corrosive confusion associated with the electioneering atmosphere

Leading the protest, against the mode of the gubernatorial primaries, Modi said that there was no election other than deception, held anywhere across the state.

Modi who spoke to newsmen Saturday, stressed that the exercise was marred by confusion, and non or late arrival of election materials and officials, contrary to the electoral guidelines espoused by the chairman of the primary election committee.

Modi noted that due to the preponderance to electoral malpractices, the chairman directed that the election be suspended on Friday night.

“At about 7pm Friday night, sensing that the exercise was not going according to the laid down guidelines, the chairman of the primary committee, Major General Ahmed Tijjani Jibril ordered that the exercise should be stopped.

“However, despite the directives, we just heard that elections were being held in the night in primary schools, private houses and where there was no light and agents of the contestants.

“The entire exercise was fraudulent, done in the dark, carried out by the officials of the state government and their agents, and we still call this election?” Modi mourned.

The aspirant, condemned the entire exercise as null and void in its entirety, noting noting that even in Banana republic, such electoral heist would be unacceptable.

“It is surprising that the guidelines were flouted with impunity to the extent that an electoral officer Mr. Peter Nwadozie who supervised the exercise in Mubi North local government announced the result of the election and declared one of the aspirants winner on camera.

“Even before the commencement of the exercise and arrival of materials, government officials were on social media posting outcome of election that did not take place.

“I will not accept this result, even if it favours me, because the whole process has been compromised,” Modi said.

Denouncing the exercise as balderdash, Ribadu said no primary election took place anywhere in Adamawa state, adding that the whole process has been hijacked and compromised by those who want to assume leadership at all cost.

Ribadu who made the position known at a press conference in Yola, noted that the development was an anticlimax to President Muhammadu Buhari’s clamour to ensure the prevalence of sanity, justice, respect for rule of law and order in Nigeria.

He noted that the primitive clamour for power has made a nocturnal small group of questionable conscience, the unconscionable “rats” to discard decorum and decency to the darkest background, only to conduct the so-called primary election in the night at primary schools and private homes of politicians claiming credibility worthy, announcing fictitious results thereafter.

“How could you conduct primaries in the night? No election has taken place anywhere in Adamawa state and therefore, impossible to declare result. This is our demand and we want justice to be done, we should as a matter of urgency save our party,” the anticorruption tsar said.

Ribadu noted that he has to withdraw from the race earlier when the NWC of the party adopted the indirect primaries due to the fact that the delegates were handpicked by the governor but decided to rejoin the race after the party rescinded the decision against the earlier deception and adopted the direct primaries due to the trust that was to turn out to be terribly disheartening, that people would not be disenfranchised.

In order to ensure a free and fair exercise, the anticorruption tsar said, he outlined some measures during the stakeholders meeting with the electoral body in order to address any form of injustice and impunity, noting that he suggested that neutral persons like NUT officials and party officials from another state, should be deployed for the exercise.

Ribadu said, his worst fears were confirmed when the whole process was hijacked by the state government, as thousands of his supporters were disenfranchised, having gone to the polling units without seeing any electrical official, let alone election materials, adding that some of his supporters remained at the polling units till 3:00am without seeing any electoral officer.

the anticorruption tsar stated that, his personal visits to various polling centres in the state capital, confirmed to him that election did not hold even in Yola, let alone difficult terrains such as Madagali and Michika.

“Officials and materials were hijacked by party officials, who filled and returned them with no media coverage at night,” he said.

Ribadu demanded that for the party to regain its lost glory and as a matter of urgency, the NWC should immediately cancel the fictitious elections, while demanding for the disbandment of the party executives because they were biased.

Ribadu said the action of the party officials, was an antithesis to Buhari’s known stance of justice and fairplay, adding that while Buhari was busy setting standards, some “rats” at the lower level were busy destroying his achievements, which he lamented, was unfortunate.

One of the sympathisers to the alleged impunity, argued that the APC primary election in Adamawa state was a falsification of the reflection of delegated representation by direct primary election.

Malam Yunusa Mohammed Abubakar a Buharist the literary critic who was inYola weekend has deconstructed the conduct of the APC gubernatorial primary election in Adamawa as a fictional thriller at its peak; a Michael Jackson-a-tion in cinematic term, of the primary election.

The supporters of governor Bindow however argued that it was a healthy game based on unbiased number as was declared by the electoral panel.

“Modi and Ribadu with other radicals antagonistic to Bindow, should submit to date and join in working for the victory of APC in 2019” the Bindow sympathiser opening a seeming reconciliatory window.

Whether or not the results of the Adamawa state APC gubernatorial primaries would be considered as valid, would be a decision of the Comrade Oshiomhole led NWC.

Oshiomhole, it could be recalled, was credited as saying that party primaries were to be conducted and the results were to be announced only by the electoral panel.

“Primaries are to be conducted not by state governments.

“Primaries are to be conducted not by secretaries to state governments.

“Primaries are to be conducted not by the state chairmen of the parties.

“Primaries are to be conducted by the electoral panels.

“The results of the primaries are to be announced by returning officers who chair the panels that are sent to respective states. That is the game.

“It is not the game of power. It is a game of number.

“And that God will us courage to stick to and ensure that it works.”

Meanwhile, the window of relief with Bindow’s declared victory after the uncertainty, is opened for the three groups in separate celebrations.

The Bindow group argued that the primaries was the just thin line between their principal and the victory to Dougirei hill for a second chance.

The PDP Fintiri and the ADC Nyako group conceived that the victory of governor Bindow at the APC primaries, would be a window for a work over, owing to the leadership inefficiency and deception associated with the latter.