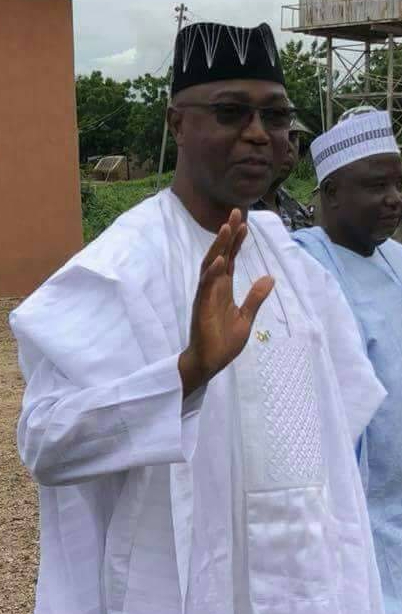 “The new development is only a reinforcement of the Wednesday disappointment occasioned by impunity in, which fantastically disenfranchised us. We’re disenchanted.
What’s the way out?” An electorate lamenting

The endorsement of governor Bindow by the APC primaries electoral panel as the gubernatorial aspirant, was not a welcome development in Maiha.

The electorates lamented that though Bindow claimed to be an indigene of, there was nothing to show for democracy and good governance in the seemingly abandoned local government area other than the sown seed of serial discords resulting from matters relating to the legitimacy of the monarchy in Jalingo-Maiha district.

No township road, no any work on portable water, no this and no that and that governor Bindow would not comply with the court order to endorse for the approval of the legitimate district head of Maiha, which allowed the room for contempt of court.

Even though Bindow’s endorsement was received as a welcome development by ADC and PDP party members, because of what they believed, the governor would be easier defeated, some electorates in Maiha were with the impression that Bindow would have experienced what would mean by denying the monarch and subjects their legitimate mandate, if he was defeated at the level of the party primaries.

The news that the alleged representational inefficiency was endorsed by APC NWC, was said to be another moving misfortune, which made for mourning in Maiha.

Northern senatorial zone of Adamawa state was alleged to be misrepresented by the clueless inefficiency, which necessitated the clarion call for a desired change.

The lawmaker representing Maiha, Mubi north and south local government areas at the house of representatives Hon Abdurrahman Shuaibu, Aras would arrantly not shine but shy away from the problems of and the people whose mandate he was said to be riding on.

Aras was only seen in Maiha for the first time, or so it was alleged over three years after the election, to solicit for another chance to enjoy the dividends of democracy and representation with just his immediate family members.

By way of response, Aras was said to be lambasted and lampooned. Was said to be catastrophically catapulted and castigated, the humiliation would have been enough a moral justification for a lawmaker not to only not think of recontesting but to also tender resignation, owing to the representational fallacy.

However, as the party alleged to have promised, Aras won the APC automatic ticket. How not to lose the mandate to the opposition party, is left for he who should swim out from a deeper than Du ponds.

The Senator representing the northern senatorial zone of Adamawa Binta Masi was said to be without Mercy. The Sak beneficiary, Masi would not be intimidated by masses, provided that she was assured APC ticket for continuity.

The electorates prayed for divine intervention with a view to getting out of the maze, not with folded arms but with struggle working out for worthy representations.

It was indeed a prayer answered. However, the choice of the electorates was schemed out. Dr. Abdullahi Dauda Belel the hope of the hapless hopeless was equally shortchanged by disenfranchising the electorates who would rather opt for another candidate in another party as some of them revealed to the Periscope Global Investigate.

Belel was not beaten by Binta at the poll. Masi only enjoyed the mercy of the NWC.
.
Speaking to the Periscope, Dr. Belel said that every available effort was made. Every available option was taken with a view to providing succour to the community of the offended, who called for effective and efficient representation. However, the Most Merciful decided otherwise as APC NWC endorsed Masi.

“We have done all we could but the APC National Working Committee approved Senator Binta Masi Garba as the only aspirant for Adamawa North Senatorial District.

“I personally witnessed the just concluded single aspirant APC primaries today Sunday, 7th October 2018, and wish to thank all my supporters, delegates and party officials for their show of confidence. Especially, at the election venue.

“We shall never relent on our efforts in building our future,” Dr. Abdullahi Dauda Belel said.

“The new development is only a reinforcement of the Wednesday disappointment occasioned by impunity in, which fantastically disenfranchised us. We’re disenchanted.
What’s the way out?” An electorate lamenting.