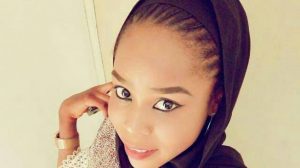 “Islam is a region peace and tolerance, unity and mutual coexistence that frowns at violence and any form of injustice.

“Islam teaches that there’s no compulsion in religion. What type of religion is Boko Haram? Islam Haram Haram, I guess,” a critical thinker with Islamic background would argue.

TheCable online reports that the in spite of the international call, the Islamic State West Africa Province (ISWAP), a faction of Boko Haram, has executed Hauwa Leman, an aid worker with the International Committee of the Red Cross (ICRC),

The terrorists also vowed to keep Leah Sharibu, the Dapchi schoolgirl, as “a slave for life”, TheCable exclusively gathered.

In a short clip seen by a special correspondent of TheCable, Leman was forced to kneel down, with her hands tied inside a white hijab which has a crest symbol, and then shot at close range.

In September 2018, the insurgent group killed Saifura Ahmed, one of the three humanitarian workers abducted in Rann, Kala Balge local government area of Borno state, in March 2018, in a similar manner.

Leman, a 24-year-old midwife and student of health education at the University of Maiduguri, was in the group that was abducted.

Toafic Toure, ICRC operational communication delegate, Maiduguri sub-delegation, had on Sunday pleaded with the federal government to avert Leman’s killing as the Monday deadline given by the insurgents approached.

ISWAP, in a short statement, said: “We have kept our word exactly as we said, by killing another humanitarian worker, Hauwa Leman, who is working with the International Committee of the Red Cross (ICRC) that were abducted during a raid on a military facility in Rann, Kala Balge in March 2018.

“Saifura and Hauwa were killed because they are considered as Murtads (apostates) by the group because they were once Muslims that have abandoned their Islam, the moment they chose to work with the Red Cross, and for us, there is no difference between Red Cross and UNICEF.

“If we see them, we will kill the apostates among them, men or women, and chose to kill or keep the infidels as slaves, men or women.”

‘LEAH AND ALICE WILL BE OUR SLAVES’

Meanwhile, ISWAP has threatenedto keep Sharibu as a slave.

She is the only Christian among the 110 girls abducted at the Government Girls’ Science and Technical College, Dapchi, Yobe state, on February 19, 2018.

While other girls were released, she was kept back because she refused to renounce her Christian faith.

There has been a global plea for her release.

The group said in the statement that Alice Ngaddah, a Christian who works with UNICEF, will also be kept as a slave.

“Based on our doctrines, it is now lawful for us to do whatever we want to do with them,” the group further said.

‘TELL MY PARENTS I’M IN TROUBLE’

In the audio sent to one of her male friends when she was captured in March, Leman, who spoke in Hausa, said her parents should be informed that she had been kidnapped.

Running and panting, the victim said: “We are under attack in Rann. They are shooting everywhere please pray for me; please go and tell my parents that I am in trouble.

“Please, look for Fatima and tell her they are taking us away. They have entered here now…”

At that point, a male voice ordered her to keep quiet and not to move an inch. That was the last that was heard from her.