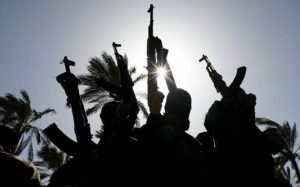 It was not at ease in the early ours of Thursday at Wauru-Jabbe Ward, Yola South local government area of Adamawa state.

The Periscope Global Publishers Investigate would reveal that some well armed, ready to kill gangs were alleged to have cordoned the area at about 2am. Their mission was not apparently clear. However, they were said to have identified the residence of Malam Gaude Maianguwa, the ward head  of the area. They ransacked the house, carted away some money that was not estimated, with some valuable materials that were not quantified.

The gangs equally abducted the ward head, living his terrified family members with prayers in morning and the ward, few kilometers away from the Yola International Airport, in sober reflection.

The Periscope Global Publishers Investigate, would reveal that two of the alleged gang members, were later identified and arrested. The two could give a lead to the whereabouts of the abducted ward head and other gang members.

Nigeria 2019: Where Are The Trekkers For The President?