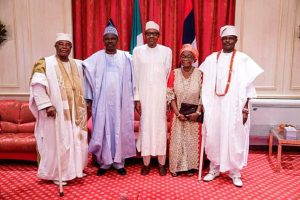 The Ogun APC Governorship primaries controversy was finally put to rest Sunday when President Muhammadu Buhari told a delegation of Ogun monarchs that the decision of the party was final.

There has been allegation that the Obas in Ogun were sponsored by Governor Amosun to do his bidding before the president.

Amosun’s presence at the Villa meeting has by implication, confirmed the allegations.

A reliable source at the Presidency informed our correspondent that after making their case in support of Amosun’s preferred candidate, Hon. Abdulkadir Adekunle Akinlade, and appealing to President Buhari to intervene, the President thanked the delegation, especially the traditional rulers.

He however turned down their request to intervene saying that the highest organ of the party has ratified the candidature of Prince Dapo Abiodun at its meeting of last Thursday.

President Buhari maintained that it would be against his principles and well known stand to intervene in the running of the party. He blamed Governor Amosun for not participating in the primaries conducted by the party through the National Working Committee (NWC), and wondered how he wanted his candidate to be declared winner in an election he never contested.

The source also informed that the President expressed dismay the way Governor Amosun has carried himself about, causing disagreement in the party, dropping his name and creating enemies for the President.

It was at this point that the traditional rulers pleaded on behalf of the governor with a promise that Amosun would turn a new leaf and withdraw his sponsored court action against Prince Dapo Abiodun.

It was gathered that, unlike the dummy sold to his supporters, the main reason for the visit was actually to plead with the President on behalf of Amosun, who was recently bared from coming to the villa without clearance.

The Alake of Egbaland is expected to address the media on the outcome of the visit tomorrow, when he is expected to sue for peace among the warring factions of APC. The visit was Governor Amosun’s fourth visit to the President in the Villa in two weeks.

IBDFM Enters Publicity Pact With The Periscope, The Newshawk, Daily Hint, Others