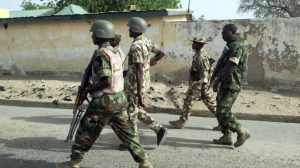 The 20 model battalion of the Nigeria army says it has discovered an illegal security training camp located in Serti, Taraba state.

Sani Adamu, commanding officer of the battalion, disclosed this on Thursday.

According to NAN, the commander said Agyo Wapan, special adviser on security to Darius Ishaku, governor of the state, had been invited as part of the investigation on the issue.

He said the training camp was discovered after a tip off that at least 300 youth were being trained in a public primary school in the area.

He added that he promptly responded by visiting the site and found over 300 young men undergoing military training.

The commander said the training was being conducted by GS Security Services, a security outfit in the state, allegedly hired by the state government to train selected youths as marshals.

Sani noted that the young men have been profiled and the camp, dismantled, while awaiting directive from the army headquarters.

Abubakar Mohammed, a resident, said the alarm was raised because of the frequent clashes among youth who “were commonly used by desperate politicians to hunt their enemies”.

“We suspect that the state government is training them, under whatever guise, to use them to disrupt the election process in 2019,” he said.

When contacted, Umar Mohammed, chairman of Gashaka local government area, said the state government was aware of the training.

He said 10 youth were selected from each ward to be trained as marshals who would subsequently be deployed to provide security in their areas.

Mohammed said before the exercise, the military, police and the Department of State Service (DSS) were invited to a security meeting where the issues of uniform and other kitting of the marshals were agreed on.

He said those being trained in Serti were recruited from Sardauna and Gashaka areas “with the full knowledge of stakeholders in each ward”.