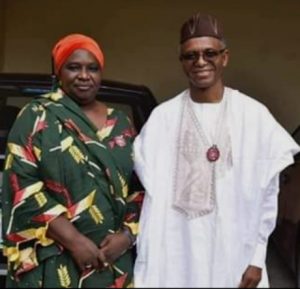 By Fateema B. Bello, Kaduna

Let me start by congratulating the Daily Trust for exclusively reporting the choice of Dr Hadiza Abubakar-Balarabe as the running mate of Governor Nasiru El-Rufai ahead of the formal announcement by the government.

As is to be expected with a cosmopolitan state like Kaduna, El-Rufai’s choice is generating debate within and outside the state.

Indeed, to justify El-Rufai’s decision, many are citing example with Plateau State, where Muslims don’t get nominated for the deputy governorship slot despite their sizeable number in the state. They are asking that if it is okay to run a Christian-Christian ticket in Plateau State, why should running a Muslim-Muslim ticket be a problem in Kaduna? Doesn’t Plateau State also have ethno-religious challenges like Kaduna State?

But those who are against the decision are also advancing their own reasons, saying the decision will not promote peace in the volatile state. One of such people is Senator Shehu Sani, who recently defected from the ruling All Progressives Congress (APC) in the state to the Peoples Redemption Party (PRP).

“Kaduna state is a multi-religious and multi ethnic state. We are a society of diversity. People of all faiths must be treated with equal respect and dignity. None should be treated with contempt or disrespect by any Government or non-state actors. This is justice, this is peace,” the senator posted on his twitter account. Though he did not mention any name, the message he was trying to pass was visible for all to see.

There are certainly many others who share Shehu Sani’s view but will want to keep quiet so as not to appear bigoted.

Sadly, we – including the media – have now reduced the choice of Dr Hadiza to her faith. No one is talking about what the Numana lady from Gwantu, Sanga Local Government Area, in the southern part of Kaduna State, can bring to the table. Very few also remember that Hadiza is a trained medical consultant on public health and primary health care.

I have many questions to ask, but I will settle for two or three. If the Southern Kaduna cannot respect the choice of someone from their area because she is a Muslim, will they support a Christian say from Makarfi for the deputy governorship slot? Or are Muslims seen as outsiders in southern Kaduna? What is the position of the constitution with regards to el-Rufai’s choice?

Before I get the answers to the questions above, I dare say that el-Rufai’s choice of Dr Hadiza as his running mate is not a religious decision. It is what it is: politics. And this can best be rejected at the polls, not on social media platforms or newspaper pages.