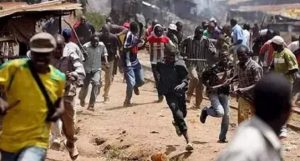 The Nigerian Police two days ago arraigned 19 suspects in court over the killing of General Idris Muhammed Alkali (rtd). All 19 men were remanded in prison.

However, the Muslim Rights Concern (MURIC) has questioned the line up in the list of 19 suspects. According to the human rights organization, all 19 suspects are ordinary Berom citizens.

In a press statement issued on Wednesday and signed by its director and founder, Professor Ishaq Akintola, MURIC wondered if the 19 suspects were capable of commiting the crime alone.

“Those 19 men paraded on television are ordinary Berom citizens. They are just the fall guys. They are incapable of importing arms and ammunition from outside Nigeria. They lack the capacity to finance the recruitment of hitmen, store weapons, train the militia and distribute arms.

“The police must dig deeper. Where are the financiers? Where are the big guys? Where are their sponsors? What of their arms depot? There is need to identify the armourer and trace the supply line as well as the illegal training camps which of course are established with the official backing of their state governments.

The Plateau crisis festered because nobody was ever punished in spite of the regular killings and it will continue to defy solutions until the big guns behind the killings are dealt with the same way their errand boys are being treated now. There must be no sacred cows in this case.

“Equally didactic are several containers seized at the borders with the arms and ammunitions particularly during the present Buhari administration. The fact that such seizures began only after there was a change of leadership both in the Federal Government (FG) and customs suggests that the illegal smuggling of arms into the country has been going on for long with the tacit support of the immediate past government at the federal level.

“Or could all these have been possible without the active connivance of the immediate past administration at the federal level? What is very clear is that the state governments of Plateau, Benue and Taraba provided official cover for the criminals. It is interesting to note that illegal training camps have also been discovered in those states.

“MURIC is therefore dissatisfied with the prosecution of mere errand boys. The sponsors must be fished out otherwise the killings will continue. Fulanis and other Muslim travelers on that axis are now endangered species on whom Berom killers can pounce any moment.

“The task before the Federal Government (FG) and the security agencies is to find the sponsors, flood the highways which are usually blocked by the Berom killers with soldiers and make the roads safe for travellers. These are necessary steps in order to build trust in the Nigerian Muslim community. Fulanis and Muslims are the victims and they need FG’s assurance that government is prepared to provide security.

“By the way, what is the Directorate of State Services doing in Plateau State? The onus is on the leadership of the state chapter of the DSS to uncover the brains behind the killings. Hundreds of Muslims were massacred in 2001. Again in 2011, an equally large number was merciless killed, roasted and eaten up a la cannibals at the Id (Salah ground). No secret security outfit worth its salt can remain ignorant of the nitty-gritties of such massive killings under its watch. DSS should dust up its files and place its cards on the table. Nigerian Muslims are tired of hanky-pankies.

As our last shot, we demand the arrest and prosecution of the big shots behind the Berom killers. We charge the Plateau State chapter of the DSS to get cracking. We assert emphatically, unequivocally and categorically that there can be no enduring solution to the Plateau crisis until the sponsors of killers are apprehended. There must be no sacred cows.