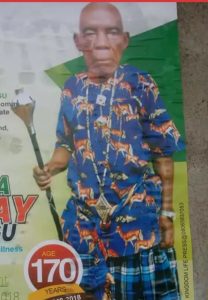 Nigerians have revealed their surprise following the obituary poster of a man who is said to have died at the estimated age of 170 (1848 – 2018).

The deceased identified as Pa Monday Agwalogu from Osisioma Ngwa local government area of Abia state, passed away in May 2018 after a brief sickness.

The man who is believed to be the oldest in his village before his death, is to be buried next week Thursday and Friday (November 15th and 16th) in his community.

Pa left People wondering whether or not he could have lived to that reported estimated age.

Man Brings His Generator For Child’s Treatment At UCTH