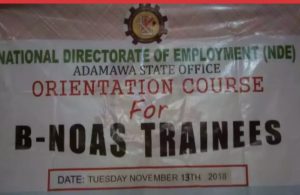 The National Directorate of Employment (NDE), has commenced training of 360 unemployed youths on various skills in Adamawa.

Declaring the 3-months training open at a ceremony Tuesday in Yola, the Director-General of NDE, Dr Nasir Mohammed, said the training was currently going on in 16 states under the directorates National Open Apprenticeship Scheme (B-NOAS).

Represented by Shittu Mohammed, an Assistant Director in NDE, Mohammed said the beneficiaries of the programme should count themselves lucky for being part of the training in five skills comprising catering, computer, electrical installation, interior decoration and hair dressing.

In his speech, the Adamawa Coordinator of NDE, Mr Kenneth Maigida, who said the training was taking place in three centres across the state, thanked the Director General for choosing Adamawa as one of the 16 benefitting states.

Maigida urged the beneficiaries to reciprocate the gesture by taking the training with all seriousness for maximum benefit.

“Take the training with all seriousness it deserve to acquire the needed skills to be self reliant,” Maigida said.

Also speaking, the Head of Vocational Skills Development (VSD), Ibrahim Abali and the Auditor, Aisha Fika reiterated the commitment of NDE to its mandate of skills acquisition training and lauded the trainers of the directorate programmes for their active contributions to its successes.

They also urged the trainees to take their training seriously because all skill are important, adding that a skilled person has added advantage wherever there’s employment opportunities.

In a related development, the NDE in Adamawa has attached 50 other trainees with master trainers for a three month programme under its Environment Beautification Training Scheme (EBTS)

The 50 beneficiaries are to be trained in interlocking, POP making and landscaping.