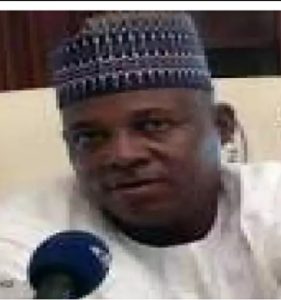 Typical of a gentleman with rare humility in the amidst power, Borno Governor, Kashim Shettima was Friday reported to have placed a phone call and tendered an unreserved apology to Senator Mohammed Abba Aji (his opponent for the 2019 Borno central senatorial election) over a short video clip, which showed the Governor, throwing a joke that made mockery of Abba Aji at a political related gathering in Maiduguri.

Shettima’s adviser on communications and strategy, Malam Isa Gusau, said a reflection on the video as being shared by his supporters in the last couple of days, the Governor felt it was untypical of himself to have made a joke out of anyone’s height rather than focusing on issues as he (the Governor) is mostly known for.

“Without anyone’s prompting, Governor Kashim Shettima, in a usual characteristic of constant self-evaluation, felt very bad about his joking remarks against Senator Mohammed Abba Aji, captured in a short video clip that has been in circulation on socials. The Governor believed he acted contrary to his cherished values of striving to remain a gentleman with extreme tolerance and a large heart required in leading all manner of people. Though the Governor had tried to preserve these and other good attributes for many years, he went overboard as typical of imperfect human nature. With regret, Governor Shettima on Friday afternoon called the telephone line of Senator Mohammed Abba Aji and tendered an unreserved apology to him. During the friendly phone call, the response of Senator Abba Aji was graceful. The Governor appealed to his supporters, to kindly desist from distributing the short video in reference any further. He emphasised that he does not sanction any material that is focused on frivolities rather than issues as he is known for. More importantly, the video, the Governor reaffirms, is disrespectful to Senator Mohammed Abba Aji and should be laid to rest” Gusau wrote.

Jibrin Of Sudan And The Audacity Of Fake News