Conspiracy: Appeal After Court Order: A Delay Tactics To Suppress Heir And Superimpose The Impostor After 2019 Gubernatorial Election

Monarchy In Maiha, The Next  Conspiracy: Appeal After Court Order: A Delay Tactics To Suppress Heir And Superimpose The Impostor After 2019 Gubernatorial Election 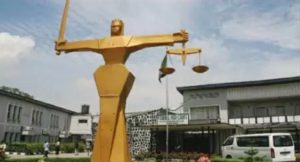 The July judgement was adjudged to have justified the agent; jury and the agency; judiciary, as having been incorruptibly impartial. It has in fact, strengthened public confidence in justice system. It was indeed celebrated with objectivity winning a war against injustice with impunity.

The judgement was simple and clear. The illegitimate should simply surrender to a humiliating defeat he and the accomplices were later to be over ambitiously unfaithful to their fate, hence unfair to themselves.

The impostor was restrained by the court order, from parading himself as  the district head of Jalingo-Maiha

The court order equally directed the governor of Adamawa state to approve Barr. Mahmud Abubakar, who won the case, as the legitimate district head of Jalingo-Maiha

“However, after over four months with the declaration of the final rather unappealable judgement, governor Bindow could not open the window for peace, justice and good governance by honouring the court order,” a literary critic would observe.

It was rumoured in Maiha and Mubi among other parts of the northern senatorial zone of the state that the impostor and accomplices were into idiotic conspiracy to deny justice by delaying implementation, until after the 2019 election when they projected, Bindow would succeed himself as the reelected governor of Adamawa state, then he would use his executive fist to “Mike Tysonate” the court order by superimposing and legitimising the impostor to the stool as district head of Jalingo-Maiha.

Whether or not the rumour has some elements of truth, could be a subject of debate.

However, what remains apparent is that governor Bindow, to this day, could not honour the court order, thereby impoverishing Jalingo-Maiha of its leadership heritage as much as the public servants with primary healthcare and local government authorities are being malnourished of their salaries.

What is also apparent is the filing of appeal against the earlier unbiased judgement before a superior court of law without backing it up with any evidence however constructive other than being a favourite candidate of a chief executive, as a legal luminary would observe.

Today Idi the governor Bindow appointed and the court dismissed district head of Jalingo-Maiha, presented to the court of appeal sitting in Yola, the same evidence that could not win him the case, he presented claiming legitimacy to the stool  before a Yola high court about four months ago.

Both parties were said to have made their submissions today and the  case was adjourned till three days after fools’ day in April, 2019.

The adjournment was said to have been celebrated by those inclined to conspiracy against the legitimacy of the monarchy in Maiha, while the protagonists were simply reported exclaimed that there’s peace in everything and that God’s time is the best