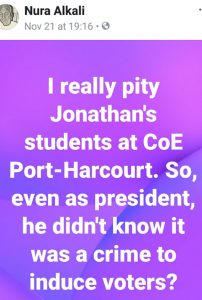 I have not read GEJ’s book, and I don’t intend to, but extracts published in newspages give a clear idea of its contents. According to GEJ (or his ghost-writer, probably Reuben Abati):

He lost re-election because Jega and Obama connived against him. Boko Haram too opposed him for being a Christian.

The Chibok abduction was staged by his opponents, and in due course, all the principal actors will confess their roles.

As president, he didn’t know it was criminal to buy votes with rice and bread, until he later observed elections in other countries.

APC’s ‘malicious propaganda’ against his government caused the subsequent recession, not his looting of the treasury in 2014/2015.

He conceded to PMB because the interest of Nigeria ‘loomed large’, he ‘hugged his thoughts’, and his ‘mantra’ guided him.

With these claims, no further proof is needed of GEJ’s schizoaffective disorder – a mental illness combining schizophrenia and a mood disorder, in this case mania.