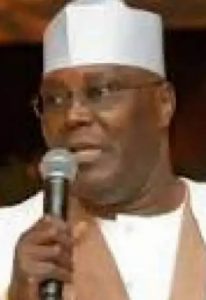 In response member of one of the politr freeical parties that formed the IAC on condition of anonymity, revealed to the Periscope Global Investigate that they were simply invited and only went to congratulate the former Vice President Atiku Abubakar The PDP presidential candidate, over his appointment as the Wazir of Adamawa as IPAC should to its member when a loyalist to Atiku a PDP stalwart, manipulated the narrative for his selfish interest.

He said that even if fetishistic, they were not drowsily hypnotised to be drowned to his bait.

Adding that for any endorsement there’s a corresponding libation, kind of a show of appreciation to be followed by negotiations for a blueprint on the how and who would form the government. However, nothing any close to that happened .

This followed the report revealed by the newshawk that:

A statement signed by the spokesman of the group and chairman state chapter of CNP, Aboki Wunuji, stated that the initial endorsement of Atiku’s presidential did not enjoy the imprimatur and consent of all members of the council.

Wunuji noted that the outgoing IPAC chairman, Rev Iliya Agowa has during the election of state exco, invited members to pay a courtesy visit to the former Vice President Atiku Abubakar over his appointment as Waziri of Adamawa.

“IPAC members and chairmen of various political parties in the state paid the visit to the former Vice President numbering 38 at his residence at 80 units.

“Earlier at the occasion, the PDP state chairman, Barr A T Shehu on behalf of IPAC members in a statement revealed that they have come to endorse Atiku Abubakar as their presidential candidate 2019 which they refuse to agree,” he said.

Wunuji further stated that the claim of A T Shehu drew a lot of anger within the group as many claimed that their mission to the house of the former Vice President was just to congratulate him over his appointment as Waziri not endorsing his presidential ambition.

The statement added that “some of the IPAC members were not happy with what took place at the courtesy visit as the spokesman did not say their mind.

“Also, we want the public to note that the statement made by Bakawu Usman, the Adamawa state IPAC secretary to Sahara Reporters on November 19, 2018 that Adamawa state IPAC has endorsed Atiku Abubakar is a blatant lie and should be disregarded by all.”

Efforts to reach the Barr A T Shehu through phone call before going to press was not successful as our reporter was told that he was attending a crucial meeting as at the time of the call.