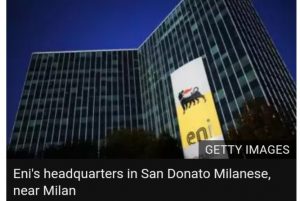 A court in Milan is considering charges of corruption against Eni and Shell in a controversial oil deal that led to Nigeria losing an estimated $6bn.

The campaign group Global Witness has calculated the OPL 245 deal in 2011 deprived Nigeria of double its annual education and healthcare budget.Eni and Shell are accused of knowing the money they paid to Nigeria would be used for bribes.
The Italian and Anglo-Dutch energy giants deny any wrongdoing.
This unfolding scandal, which is being played out in an Italian court, has involved former MI6 officers, the FBI, a former President of Nigeria, as well as current and former senior executives at the two oil companies.

The former Nigerian oil minister, Dan Etete, was found guilty by a court in France of money laundering and it emerged he used illicit funds to buy a speed boat and a chateau. It is also claimed he had so much cash in $100 bills that it weighed five tonnes.

Global Witness has spent years investigating the deal which gave Shell and Eni the rights to explore OPL 245, an offshore oil field in the Niger Delta.

It has commissioned new analysis of the way the contract was altered in favour of the energy companies and concluded Nigeria’s losses over the lifetime of the project would amount to $5.86bn, compared to terms in place before 2011. 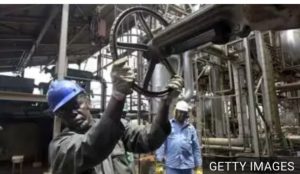 Oil giants face Nigeria ‘corruption’ trial
New evidence in Shell corruption probe
The analysis was carried out by Resources for Development Consulting on behalf of Global Witness, as well as the NGOs HEDA, RE:Common and The Corner. The estimated losses were calculated using an oil price of $70 a barrel as a basis.

Eni has criticised the way it was calculated because it ignores the possibility that Nigeria had the right to revise the deal to claim a 50% share of the production revenues.
Deal or no deal
Campaigners say the deal should be cancelled.

“We discovered that Shell had constructed a deal that cut Nigeria out of their share of profit oil from the block,” Ava Lee, a campaigner at Global Witness told the BBC’s World Business Report.
“This amount of money would be enough to educate six million teachers in Nigeria. It really can’t be underestimated just how big a deal this could be for a country that right now has the highest rates of extreme poverty in the world.”
Nigeria is the richest economy in Africa, but despite having large resources of oil and gas millions of people are poor

Lucrative OPL 245
It is understandable why Eni and Shell wanted to acquire the rights to develop OPL 245, because it is estimated to contain nine billion barrels of oil.
But the process of how they secured the contract is dogged by claims of corruption.
The court in Milan is weighing evidence of how a former Nigerian oil minister, Dan Etete, awarded ownership of OPL 245 to Malabu, a company he secretly controlled.
He is accused of paying bribes to others in the government, such as former President Goodluck Jonathan, to ensure that process went smoothly.

Shell and Eni are accused of knowing the $1.1bn they paid to Nigeria would be used for bribes, claims based on the content of emails which have since emerged.
“Looking at the emails it seems that Shell knew that the deal they were constructing was misleading but they went ahead with it anyway even though a number of Nigerian officials raised concerns about this scandalous, scandalous deal,” says Ava Lee from Global Witness.

No wrongdoing
The Anglo-Dutch and Italian energy giants insist they have done nothing wrong, because they paid the money to secure the exploration rights directly to the Nigerian government.
Shell issued a statement to BBC World Business Report saying: “Since this matter is before the Tribunal of Milan it would not be appropriate for us to comment in detail. Issues that are under consideration as part of a trial process should be adjudicated in court and we do not wish to interfere with this process.

“We maintain that the settlement was a fully legal transaction and we believe the trial judges in Italy will conclude that there is no case against Shell or its former employees.”

Eni has also denied any wrongdoing and told the BBC that it questions the competence of the experts commissioned by Global Witness and its “partners”, as well as raising the possibility that the report by the campaign group is defamatory.
Shell accused of abuses in Nigeria
The Italian oil and gas company said “as this matter is currently before the Tribunal of Milan, we are unable to comment in detail”. 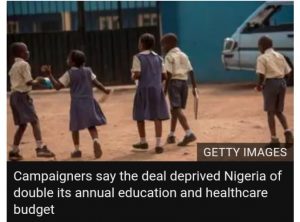 In a statement it noted: “Global Witness together with its partners Corner House, HEDA Resource Centre and Re: Common had requested twice to be admitted as aggrieved parties in the Milan proceedings. On both occasions, the request was firmly denied by the Tribunal of Milan.”Eni also said it “continues to reject any allegation of impropriety or irregularity in connection with this transaction”.
Biggest ever corruption case
Campaigners believe this is a landmark case and the outcome of the trial in Milan will cause an earthquake to reverberate through the oil and gas industry.
Nick Hildyard of the Corner House wonders if investors are comfortable. “Fund managers should be alarmed at this brazen dishonesty,” he said.
Nigeria’s leader is being encouraged to intervene by Olanrewaju Suraju, from HEDA. “President Buhari should reject any deal,” he said.
The contrast between the way Italy deals with migrants and the actions of one of the nation’s biggest companies has been raised by Antonio Tricarico of Re;Common.
“The Italian government is discouraging Nigerian migrants trying to reach Italy by claiming that it will help them at home, but Italy’s biggest multi-national, part owned by the state, is accused of scamming billions from the Nigerian people.”
The outcome of the unprecedented court case in Milan could force the oil industry to change how it conducts its business, especially in countries where corruption is rife, because more transparency about contracts and payments made would discourage fraud.