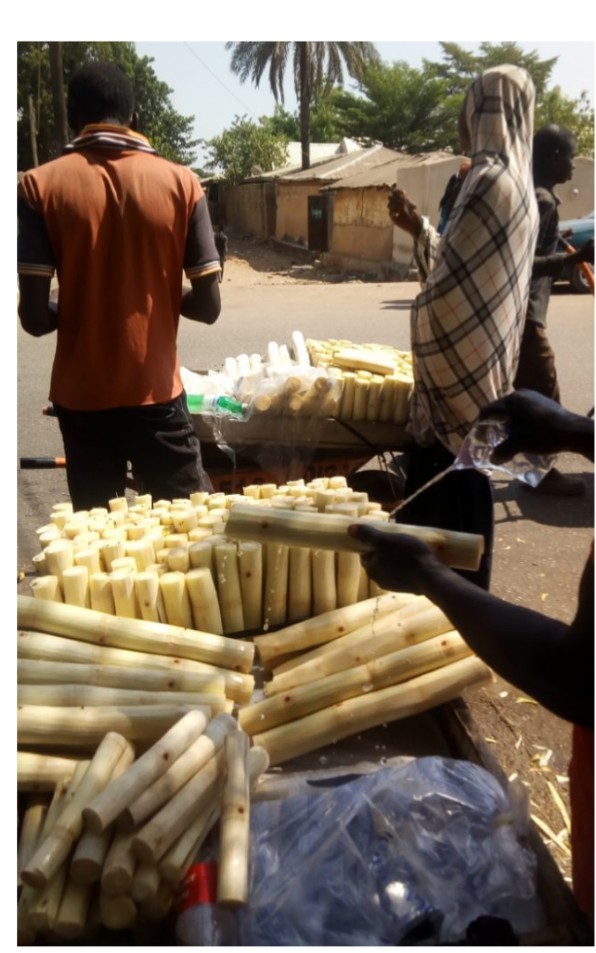 The youths in this atmosphere, making the Periscope’s mood of the moment, were three. They were from different states, They were in Yola for a sugarcane business they figured out to be lucrative.

They were bachelors, none of them has taken a path for a bachelor degree or equivalent or less. Making a metaphor of their life in either refusing or being denied the the opportunity for a polygamy in joining together rather than engaging a rivalry between or putting asunder the eastern and western scholasticism: the Modern Islamic schools could get to offer.

They had only the knowledge the almajiri type could get to benefit or bereft them. They were handicaped of any handcraft as they were not initiated into any initiative associated with skills acquisition.

They were in Yola, Adamawa state, Nigeria, perhaps for either continuity or a new beginning before being drowned in sugarcane hawking away from the embarrassing almajiri induced begging for money much more than for the food to eat to get the strength to learn Qur’anic recitation typical of the informal education of the almajiri institutions of old times.

They observed that Yola is an enlightened society with a standard of life beyond most of the states capital though there were scores of youths who abandoned education to join political begging in which some of them would eventually degenerate into meddling with, peddling illicit drugs and “political thugry,” the no future ambition considered to be irredeemably worse than almajiri begging in its irresponsibility; the ‘Yan Shila” menace is a pointer.

They observed that elites lived in tidy environment and believed in hygiene and that one could only get to succeed by succumbing to doing in Rome what the Romans do.

“We realised that we’re being patronised more by washing the sugarcane we sell, with satchel water the customers are convinced to be hygienic. It’ll not be a cholera carrier and/or prone to typhoid fever, they would say. After all, tradition has it that sugarcane is a remedy for malaria dehydration and perhaps, others. Don’t ask about my source of information.

“There’s actually no public tap water in Yola. There are boreholes in some areas being sunk by some politicians as community project, we’re told. It is however grossly inadequate as we hear people lamenting against a government that cares not about essential amenities as a relief to the downtrodden.

“The houses that do not have boreholes sunk, would have to make do with water vendors who fetch from commercial boreholes. Some of us use gallons to fetch from the boreholes to wash the sugarcane we sell.

“However, customers in Yola prefer the sugarcane that is washed with satchel water as being more hygienic for consumption,” one of the hawkers explained.

The Periscope Global Investigate sought to know from the youths why they took to sugarcane hawking when they ought to have been in school?

Some of them simply said that they were not initially introduced into the western education to have found any meaningful future in it and that they had the islamiyya knowledge enough to worship their Creator.

Some of them lamented that their parents were poor to have sent them to school and there were no sponsors.

While one from among them who simply gave his name as Umaru said he was into sugarcane hawking because he would want to be a governor.

“If I should go to school, I may have a stillborn dream of becoming a governor. You see, governor Muhammadu Umaru Jibrilla Bindow of Adamawa state was credited as saying that ‘yan boko,’ interpreted to mean, the intellectuals or elites, would never again rule the state as a governor. There’s the possibility of having a governor in my state who will nurture to maturity such a philosophy to be an opportunity for me in no distant future,” Umaru would say.