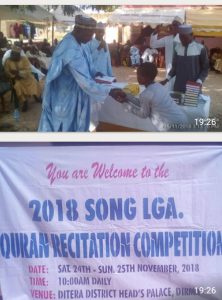 The member representing Song constituency in the Adamawa state House of Assembly Hon. Safiyanu Aliyu Muleng has pledged to sponsor the education of male and female winners of the Qur’anic recitation competition who hailed from Song local government area of Adamawa state.

The member made the pledge while declaring open 2018 Qur’anic recitation competition Song local government chapter held in Dirma at the palace of the District Head of Ditera of Dumne Development area.

Muleng charged children to be obedient to their parents so that they could be responsible members of the society as the future of the country could depend on them.

Muleng solicited for prayers from people for President Buhari, Governor Bindow and other APC candidates to enable them became victorious in the 2019 general elections so that they could consolidate on the achievements recorded.

In his remarks, the chairman of the organizing committee of the competition, retired Federal High Court Judge; Justice Adamu Hobon cautioned Muslims to desist from any act capable of portraying the image of Islamic religion in bad light.

Hobon noted that some acts exhibited by some so-called Muslims were un-Islamic and called for attitudinal change.

Hobon pointed out that some people used to hide under the guise of Islamic religion, formed terrorist groups and perpetrate heinous acts in the society only to be considered by gullible non-Muslims as being Islamic. Lamenting that due to such savage attitudes exhibited by the Satanic minded, made the western countries to consider Islamic religion and its followers as enemies of mankind, attributed it to lack of knowledge.

Hobon stated that it was the first time such occasion took place in the area. He thanked the organizers for choosing the area to host the competition and called on Islamic organisation’s to intensity preaching in the area to enable Muslims acquire more knowledge on how to conduct their daily activities based on Islamic teachings.

Hobon, while congratulating the winners and other participants for featuring in the competition, used the forum to call on government to deploy more security personnel to the area, saying inhabitants now depend largely on local security outfit (Vigilante group) for the protection of lives and properties.

Hobon however commended President Muhammadu Buhari led government for the restoration of peace in the northeast which paved way for the smooth conduct of ceremonies in the area.

On his part, the State chairman Muslim Council Alh Abubakar Sahabo Magaji attributed the high rate of rape cases in the society to high amount of dowry. He therefore, called on traditional and religious leaders to ensure that amount of dowry was within the reach of everyone.

Magaji also called on parents to give attention to the education of their children and assist towards the provision of facilities at Islamiya schools for conducive learning.

In their separate remarks, Ustaz Musa Salihu Kaduna and State coordinator Qur’anic recitation competition Ustaz Adamu Umar said the essence of the competition was to unite all Muslims regardless of their sects and instill in the minds of children the virtues of reading Holy Quran.

Ustaz Muhammad Maulud also spoke on the importance of Qur’anic recitation competition, saying it would strengthen the faith of people and earned them more rewards. He charged parents to ensure that their children recited some verses of Holy Qur’an on daily basis.

Out of 71 pupils who participated in the competition, Abdulmalik Ahmad emerged the overall winner while other categories have both male and female winners that would represent the local government at the state level, which would hold in Hong, while the National level would hold in Gombe.

Among the dignitaries that graced the occasion was the Chief Registrar, Adamawa state Shari’a Court of Appeal Barr. Hashimu Suleiman Amila.

ACF Calls For Probe On Metele Killing, Northern Govs To Allocate 25% Of Budgets To Education To End Almajiri Menace, Cautions Politicians Against Overheating The Polity