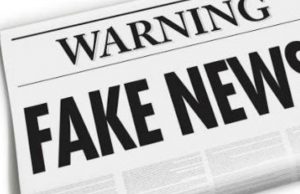 A platform, Crosscheck Nigeria, dedicated to checking and debunking fake news and misinformation in the country ahead of the 2019 general elections, has been launched.

It is expected to take up the task of verifying and scrutinising potentially false news, pictures and videos trending in social media with a view to authenticating them and debunking them when found to be false.

The project is the brain child of the International Centre for Investigative Reporting (ICIR) and First Draft News, a UK based investigative journalism outfit.

The launch of the project, which held in Lagos on Wednesday, was the high point of a two-day rigorous training of several journalists from about 15 newsrooms in the country who would be working collaboratively in running the project through the general elections and beyond.

While unveiling Crosscheck Nigeria, the Managing Director of FirstDraftNews, Jenni Sargent, explained that the project would be deploying technologies in the verification of information in the social media.

She highlighted the procedures involved in the verification of potentially false and misleading posts.

She said besides trying to verify such claims, the public using the platform would be able to see clearly the process followed in reaching conclusions on why the news item was false.

She also said all the media organisations involved would be working together to actualise the goal of checking the menace of fake news and misinformation which has become a serious challenge to journalism and the society.

In his remarks, the Executive Director of ICIR, Dayo Aiyetan, said the website would allow Nigerians to freely log onto it, post pictures, videos and any other information they want CrossCheck Nigeria to verify to curb the circulation of fake news in the country.

“It’s important to get ways to make journalism viable in today’s world. We are here today to find ways to combat misinformation that can affect our elections,” he said.

The launch also featured a panel of media executives: Martins Oloja of the Guardian,; John Momoh of Channels Television; Ikechukwu Amaechi of the Niche, and Abigail Ogwenzzy, Head of Department of Mass Communication Department, University of Lagos.

The experts discussed the challenges of dealing with fake news and how to stem the tide.