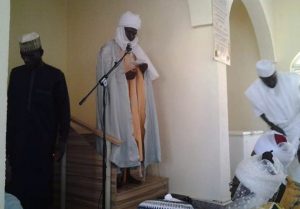 Explaining the quoted saying of Prophet Muhammad SAW relating to the signs of end times, in his Jumua’t qutba at the FMC Yola Mosque, Ustaz Haruna Yawale lamenting the experience of the present period, linking it to a time the Prophet SAW had said would come when morality in religion would be mortgaged for a low estimable, rather miserable measure as a price for immorality to be manipulated in a system to be obnoxiously considered as being modern, rather acceptable civilizational order.

The qutba defined the scenario as a period of deception: A time when the the truth and the truthful would be sacrificed for lies and liars in representation, leadership and administration.

A time when trust would be entrusted to the untrusted; setting a scene for the race to unrest called anarchy.

A time when the irresponsible would be the agents manning agency as representatives for a worthy responsibility; defining a failed state

A time when the moron and the scallywags, the insensitive and the illiterates who have no business with useful knowledge, would be at the helm of religious affairs for any decision or interpretation.

A time for the dearth of genuine faith, the sincere faithful and conscientious, rather legitimate scholars: when the so-called religious leaders; the ulamas would degenerate into the bourgeois modernist escapists scheme, based on hypocrisy with the air about betrayal of faith by interpretation to do the bidding of the rich, the so-called mighty, the aristocrats, the monarchs and/or the leadership of the state.

When even among the led, parents would support by concealing the atrocities of their thieving children, making it hard to believe that stealing is corruption, insurgency abduction for ransom and other types of terrorisms are crimes against humanity and certificate forgery amounts to examination malpractice, which as an end in itself, is corruption.

A time when killings without a cause, against the innocents would be the order of the day, when deploying all the conspiracy skills in propaganda, coverup the truth, to reduce prey into predator, and villain into victim for victory in stereotyping as in Islamophobia. Using the media of mass communication.

Journalists and budding writers belong to this vacation, exemplified by obnoxious falsification of facts relating to farmers – herdsmen crises, the Gembu, Benue and Jos massacre, to mention a few.

When jealousy and envy against one’s success would take the prime time.

Was it a coincidence? It was just but yesterday, one of my mentors in academy, forwarded the following piece to me about Nigeria, via a social media:

Could this contribute to the understanding of the wisdom in the qutba this Jumua’t?

These, the Qutba reminded the faithful, the Prophet SAW have spoken.

However, to get to be out of the maze, disembarking from the raft drifting towards the riverbank to damnation in a historic voyage to secular society, the qutba pointed out, one would have to get himself ransomed from the lust for materialism.

“One will have to run away from wealth as much as one fears death. It’ll be a worthy taqwa: the fear of God, bearing in mind that everything ill gotten, is unnecessary, because it could have been gotten genuinely. The bottom line is patience and dedication to work and worship. Holding tied to the Deen against all odds is the reprieves the solution.”

May Allah SWT guide our conducts, guard us against loosing the centre of our faithful gravity to the devil, may Allah forgive our weaknesses, strengthen our faith and reward our good deeds. May Jannatul Firdaus remain our abode. Peace!