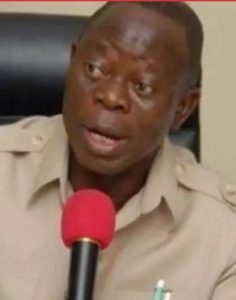 National Chairman of the All Progressives Congress (APC), Adams Oshiomhole has described some state governors on the party’s platform as poor students of history

Oshiomhole spoke after receiving the APC women leaders from Edo State and Abuja, who paid him a solidarity visit in his office in Aso Drive, Abuja.

Governors Rochas Okorocha of Imo, Ibikunle Amosun of Ogun and Abdul-Aziz Yari of Zamfara are aggrieved that their preferred candidates lost during primaries.

Oshiomhole said, “Those who think our political future is tied to them, they are poor students of their own political history.

“Some of these people who talk as if they are invincible, they have forgotten that they have run elections in the past and lost until they abandoned their parties and joined us. So if they return back, history will repeat itself.

“Whether you are a big or small man, the rules are not supposed to discriminate. Our popularity in Imo and Ogun today is much higher. It is not that once you are a governor you have high electoral value.

“Yes in APC, our governors have high electoral value but we also have a few who are electoral liabilities.”

The former Nigeria Labour Congress President said Nigeria needed to go back to the era where institutions were respected and protected and not powerful individuals.

He added that the actions of the two governors would not affect the fortunes of the party in the elections.

“But artisans, traders, teachers and workers whose salaries are not being paid have the same weight of vote and they are excited about the renewed possibility of a new government coming with fresh ideas free of all the encumbrances of the present system. So in Imo I’m very confident.

“Vice President Yemi Osinbajo is from Ogun State. The state is one of the most enlightened States in Nigeria. They have a huge history; they are not in a political kingdom headed by one person.

“If they were looking for true reconciliation, they wouldn’t have done what they did (defection of aides). That is not how democracy works. Nigeria must grow beyond this syndrome ‘I’m the governor, I will decide.’ You have only one vote. With due respect, I was once a governor. Overall APC is much stronger now”.