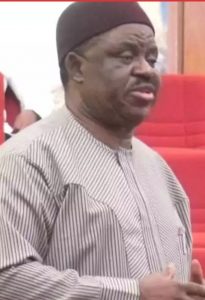 The members of the Senate Committee on Industry have lauded the Industrial Training Fund (ITF) over its prudent use of budgetary allocations, especially in funding new projects and completing abandoned ones.

The committee led by its Chairman and a former Governor of Ebonyi State, Dr. Sam Egwu, told THISDAY, that the oversight tour was to supervise the ongoing projects to ensure that the appropriated funds are properly utilised.

“The purpose of this visit is to conduct assessment on the level of budgetary implementation particularly the 2017/18 approved appropriation.” He affirmed that the vist was the second embarked by the committee.

“The first visit to the funds was at the headquartres in Jos, Plateau State, which was in June 2017. The committee would ask questions as regards to the funds provided for the completion of ongoing projects in area offices as well as the industrial training centres in Lagos.”

He added that the visit would allow them identify with the areas that require more attention in the upcoming 2019 budget.

However, the Senate committee assured the management and staff of ITF of their continuous support in the areas of law making and appropriation, adding that, the committee would not entertain lack of financial prudence, leakages or inefficiency in the midst of paucity of funds in the country.

In his remarks, the Director General of ITF, Joseph Ari, explained that the industrial training centre is presently designed to expand and bring more skills to Nigerians.

He said, “We have gone to other climes of the world and we have seen what is obtainable there and we are focused to equip and empower Nigerians with relevant skills, and through this way, our people will not be idle again in terms of employment opportunity”.

He stated that a growing population needs to be properly addressed and one of the ways to address the issue of unemployment is by engaging and occupying the youths to acquire relevant skills that would make them globally competitive because idleness would bring about restiveness and other malaise in the society and which is why we intend to provide more laboratories and workshop.

Ari thanked the members of the senate committee for giving them the push, support and the cooperation for the budgetary appropriation and to ensure that their mandate is brought to the doorsteps of Nigerians. “We have a clear focus and initiative to bring our services to Nigerians and to make Nigerians very productive.”

He added that the project started in 2007 but was abandoned and “We have come to revive it. We are very much concerned about the prudent management of resources, cost management, transparency and accountability. The project started with a total cost of N860 million and it has moved up to N1.2 billion and its already 75 per cent near completion and so far, we have given a deadline of February 2019 for the inauguration of the project which is the first quarter of next year”.