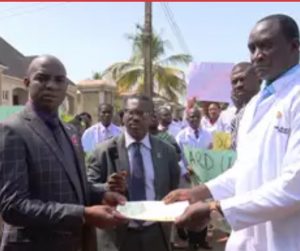 A delegation of over eighty resident doctors under the aegis of the Association of Resident Doctors from the University of Nigeria Teaching Hospital (UNTH) Ituku/Ozalla, on Thursday stormed the South East Zonal office of the Economic and Financial Crimes Commission, EFCC, Enugu.

They are demanding for the resignation and investigation of the Deputy Director of Finance of the Institution, Mr. Onuchukwu Chukwudi by the anti-graft agency.

Speaking on behalf of the protesting doctors, the President of the group, Dr.Nwidenyi Isiah said they came to the Commission to solicit for urgent intervention.

He said; “Today,we have come to visit you, today we have come to plead with you to rescue us from shackles of corruption, misappropriation of public funds by the management of the hospital. Today, we have come so you can rescue us from many years of stealing, draconian policies and administrative quagmire that has left our residency training in shambles.”

Speaking further, Nwidenyi said that for many years policies being churned out by the management have been detrimental and inimical to the progress of the doctors and the development of research,training and service delivery of the hospital.

He alleged that the deputy director of finance in connivance with the Chief Executive of the hospital had over the past four years deducted and embezzled the sum of N98,000.00 each from resident doctors and N60,000.00 from all the house officers totalling about N400 Million.

He equally accused Mr. Chukwudi of other alleged infractions and specifically mentioned the misapplying and misappriopriation of the sum of N200 Million released into the GIFMIS Account of the hospital as shortfall for two months salary by the federal government which a small part was used in paying a few doctors with the rest not being accounted for.

Speaking while receiving the delegation, the new zonal head, Usman Imam while assuring the doctors of the Commission’s willingness to address their grievances, noted that the Commission is very serious in the realization of its mandate of fighting economic and financial crimes.

“We want to sanitize the system so that we might be able to bequeath a better and decent society to our children. I will assure you on behalf of the Executive Chairman of the Commission,Ibrahim Magu that we will look at the petition and will revert back to you in due course.” He said.