•Ndume: PDP, others do not have the number to override Buhari •NASS faces legal obstacle 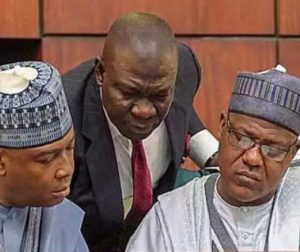 A fresh battle is reported to be brewing in the National Assembly between supporters and opponents of President Muhammadu Buhari following his rejection of the Electoral (Amendment) Bill 2018.

Some Senators and members of the House of Representatives were said to be plotting to override the President’s veto.

The plot was said to have been mooted after some of the anti-Buhari legislators got wind of the President’s decision on Thursday.

Buhari’s letter on his decision to reject the bill reached the leadership of the National Assembly on Friday.

A former Senate Leader Ali Ndume and a supporter of the president argued that those plotting to override Buhari could no muster the two- thirds majority to carry out their threat.

Ndume accused Peoples Democratic Party (PDP) as being behind the plot, which he said would fail.

Investigation by our correspondent showed that some pro and anti-Electoral (Amendment) Bill 2018 held separate meetings in Abuja on Friday and Saturday on the way forward.

While those in PDP opted to override the President’s veto, those in APC were backing Buhari because the bill might ‘distort’ preparations for the 2019 poll.

Some members of the National Assembly, especially those from the North were angry that the lawmakers from the opposition party were politicising the bill.

They alleged that some of their colleagues have been insinuating that the bill was meant to check rigging in the North.

At a meeting of the anti-Buhari legislators held in Maitama District Abuja ,participants agreed to override the President’s assent.

They also plotted to “make a political capital of the presidential decline by putting Buhari on the spot and portraying him as not ready to conduct free and fair polls.”

They also reached a consensus to mobilise civil society organizations to mount pressure on the international community against Buhari.

Another drastic option is a suggestion by some Senators and Members of House of Representatives to make the signing of the bill a condition for the presentation of 2019 Budget by Buhari.

A ranking Senator said: “We have resolved to override the President’s assent because his reasons are really untenable. No one is out to derail the 2019 polls. Instead, the bill contains some amendments that will ensure a free and fair process.

“Although we had anticipated it, we got to know of the decline by the President on Thursday. The President cannot have his cake and eat it this time around.”

A second term member of the House of Representatives, who attended a separate stock-taking session in Asokoro District, said: “Some of us are backing the President because certain provisions are difficult to implement due to time constraint.

“For instance, Section 44 of the bill states that parties must be invited to inspect their identities and show whether they approve or otherwise of how they are represented on electoral materials.

“This amounts to interference in INEC’s work. Why should parties be privy to how ballot paper is designed?

“Having awarded the contract for ballot papers, the National Assembly cannot draw back the electoral commission.”

A Senator from North-Central admitted that Senators and Representatives have been holding consultations along what he described as ‘our fault lines.’ “The truth is that the nation needs more time to adopt the Electoral (Amendment) Bill 2018. We have met and our position is that the bill should take effect after the 2019 poll.”

A member of the House of Representatives from Sokoto State said: “I do not see those in support of the bill getting two-third to override the President’s veto.”

A former Senate Leader, Senator Ali Ndume told our correspondent that it would be impossible for those anti-Buhari Senators and Representatives to secure two-third to override the veto on Electoral Bill.

Ndume said: “The President has his reasons but there is Article 2 of ECOWAS Protocol on Democracy and Good Governance that prohibits passing of a law within a period shorter than six months to the election.

“The President has the right to withhold his assent. I am standing with Mr. President on his decision.

Responding to a question, Ndume said: “Did Mr. President threaten to rig the 2019 poll? Anybody threatening or raising alarm about rigging is the rigger. Buhari by his personality and character is not somebody that will rig election or encourage rigging.

“Let me add that the same Buhari went into election because PDP rigged three times. They think everyone is in the same position like PDP or would take advantage to rig election.

“We assure them that APC will not rig elections because it is not in our character,” Ndume said.

There were indications, at press time, that the National Assembly had a legal hurdle to cross in overriding the President because of a case in court.

Three political parties have filed an action at the Federal High Court, Abuja seeking an order of the court to stop President Muhammadu Buhari from assenting to the Electoral Amendment Bill 2018.

They also asked the court to declare that signing the bill into law would truncate the 2019 general election.

The respondents in the suit are the Senate President, the Speaker, House of Representatives, the INEC Chairman and the Attorney-General of the Federation

It was learnt that until this matter was disposed of by the court, any action taken by the National Assembly on the bill would be subjudice