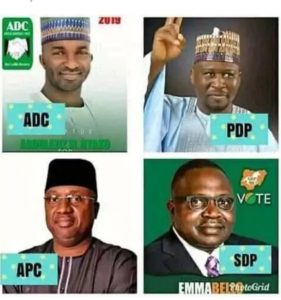 There is this saying that when the talk is about animals that have horns the snail should be counted out. Adamawa has 28 gubernatorial aspirants under various political parties ready set for the 2019 contest. However, four of the aspirants clearly stand out as potential winners of the duel.

To start with, Gov. Bindow nicknamed action governor by his many supporters is very visible. His large followers said his programme “Bindow for Social Change (BSC)” has ensured steady delivery of dividends of democracy to the people like never before in the history of Adamawa.

Bindow also said that he has fulfilled most of his campaign promises and need not even campaign because his many works are speaking for him.

Bindow won the last governorship election with a landslide that was never recorded before in the state; the gab was so large that the total votes of his other 11 opponents in that election put together didn’t catch up with his votes. He is mobilizing to repeat the same feat in 2019 contest seen by his constituency as “a contest between Bindow and others”.

Fintiri of PDP made waves when he served as acting governor in 2014 following the impeachment of former governor Murtala Nyako. Fintiri’s brief tenure was full of activities like roads construction and settlement of workers outstanding entitlements. Workers call him ATM and always remember his tenure with nostalgia.

Fintiri campaign slogan is “Fresh Air” and his teeming supporters who feel “one good turn deserves another” see him coming back as one with the people’s goodwill and capacity to sack the sitting governor.

“I present myself again to your service; I have come back to ask for another opportunity to repeat my past performance and invite all and sundry to collectively join hands in tackling the enormous task of restoring our dear state,” Fintiri said when flagging-off his campaign. To his teeming supporters who can’t wait for the Election Day, it’s a matter of happy days are here again.

Senator Abdulazeez Nyako who defected from APC to ADC where he emerged the gubernatorial candidate is the “brain box” of his father’s (former Gov. Nyako) political empire known to be so formidable in the state and played vital role in the victory of Gov. Bindow in 2015 despite move by Atiku’s group to stop Bindow’s candidature.

Abdulazeez popularly known by his supporters as “Commander” is the former Youth Leader (Sarkin Matasa) of Adamawa Emirate and had used that position to reach out to youths across the state.

He is believed to have tentacles across the state, which saw to the acceptance and rapid growth of ADC in the state.

ADC is seen as the “save heaven” of many aggrieved APC members in Adamawa that have the capacity to rock the boat.

“We have a big job ahead of us as people of Adamawa are now highly distressed and need to be rescued,” AbdulAzeez said when addressing a crowd of his supporters after his emergence as ADC candidate.

Chief Emmanuel Bello of SDP is another crowd puller whose entry into the party from APC restored the lost glory of SDP in the state.

SDP displaced PDP as the runner up in 2015 governorship election in Adamawa, and this time around supporters of the growing party, which attracts support from many minority groups in Adamawa have hope in Bello’s ability to harnessed it appeal to minorities and aggrieved groups in clinching the first position.

“I will like to commend all the leaders of our party in the state for working tirelessly, sometimes for many days without sleep to mobilize our teeming members into the massive movement that our party has become today in Adamawa state..

“I urge you all to gird your loins for the major battle ahead, remembering all the time that protecting your votes is essential to victory,” said Bello in his acceptance speech as candidate of the party.

Bello who is campaigning on five point agenda is perceived by many as a potent force to reckon with in Adamawa political chess game where a united minority can change the balance of power.

The die is cast. As Lydon Irving said, “No leg’s too short to reach the ground”.