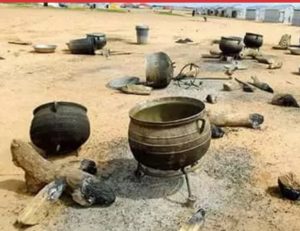 It became Paramount for the Federal Government to intervene into this callous and barbaric act perpetrated by some evil incarnates in human skin and flesh to deprive and subject the Vulnerable displaced ladies into a Comatose Situation.

The Borno state Government Under the Leadership of Governor Kashim Shettima, is treating the issues of the internally displaced persons (IDPs) with levity and deaf ears because the atrocities had been going on in various camps within the metropolis for quite a long time, whereby young displaced ladies exchange their bodies for food, money and toiletries.

Prostitution has been organised in camps where boys troop in from the town to satisfy their Sexual desires for Some peanut change of just a N100 per round and the SEMA knows this very well as some of the staffs enjoy the beautiful vulnerable ladies as their sex machines in exchange for the same food they were entitled to: the Food that was meant for their consumption and wellbeing.

The lucky vulnerable ladies within the camps are those ones that have boyfriends from the town, they are used as rags and doormats because of their conditions, while some are lucky to be kept away from the camps for good.

IDPs camps are only situated in Borno State amidst the Northeastern states that were affected and still affecting by the boko haram insurgencies.

Yobe state had cleared its camps, everyone is settled in their various local government areas and houses.

Adamawa state had before now cleared its camps by returning the IDPs to their various settlements.

Why is Borno state different?

Late Mohammed Yusuf and Shekau the founders of Boko Haram Movement are both indigenes of Yobe and Yusufari precisely.

The question that is remained to be asked is, how comes Together is free from Boko haram insurgency and why Borno state still experiences the insugency?

There could be something Nigerians are not told about this Boko haram of a Movement.

The fight against insurgents is been nursed and now politicised and used as source of personal income generated revenue that goes direct to the pockets of the organisers.

Kashim Shettima is not telling Nigerians why this fight against Insurgent kept escalating with shallow results.