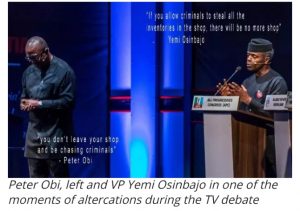 Fact checkers went to work Friday night to puncture some of the statistics quoted by Peter Obi, the vice-presidential candidate of the opposition Peoples Democratic Party at the live TV debate at the Transcorp Hilton Hotel in Abuja.

In arguing that petrol subsidy that he estimated to be a trillion naira a year was a waste, Obi said there are only two million vehicles in Nigeria.

Fact-checking revealed otherwise. According to National Bureau of Statistics(NBS), Nigeria has over 11.5million vehicles on the road, as at 2017.

Obi was correct when he said oil exports still accounts for 80 per cent of Nigeria’s dollar revenue. However, oil contribution to GDP has dwindled to about 10 per cent, according to NBS.

But he was caught out when he claimed that his administration as governor of Anambra state was the first to buy up to 30,000 computers for schools. Twitterati said Governor Kayode Fayemi bought more in his first term in Ekiti State. He reportedly bought 48,000 Samsung laptops, 30,000 for students and 18,000 for teachers.

Despite the statistical goofs, Obi was praised by many PDP sympathisers for his performance during the debate.

Aminu Tambuwal, governor of Sokoto state, who had not tweeted for a long time, wrote:

Aminu W. Tambuwal
@AWTambuwal
Watching the #VPDebate I can assure Nigerians that @officialPDPnig we got the right man for the job as Vice President.