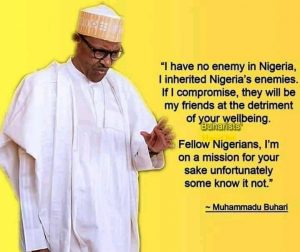 Nigeria is indeed a dynamic country where we have found the habit of looking at things mainly upside down and without giving it a second thought or a benefit of a doubt.

In most times, we cry wolf where none exist. We are quick to “pull down” and celebrate the consequent downfall. Welcome to Nigeria.

No discerning mind would deny that the Nigerian economy was in absolute brink when President Muhammadu Buhari took over the affairs of government in 2015.

Bad enough that those responsible for this malaise have never owned up to their dastardly acts because of how morally bankrupt they are. So for them, displaying remorse is forbidden and taking responsibility for their actions and inactions while they held sway is not even a topic for discussion because as they say, the cake is big enough for everybody.

I am constrained to pen this article when the words merchant went to town turning a statement credited to President Muhammadu Buhari upside down for obvious political reasons.

I was astonished. I was also concerned about what it was that the supposed “self-righteous ones” wanted to achieve and what they didn’t achieve when they had the opportunity to put Nigeria on the path to greatness.

That is an impossibility, not after 16 locust years under misrule by successive PDP administrations. I think that just before we crucify President Muhammadu Buhari, we should take out time for sober reflection on how previous administrations squandered our commonwealth.

Also, on how Nigeria witnessed policy somersault year in year out, not minding the fact that there would be consequences.

Appalling a statement coming from the president especially as the elections are around the corner they thought. The political strategists would see this statement if valid as a political blunder. They would also argue that the president went too far in expressions. But I disagree in totality.

As a first, the statement didn’t emanate from the president directly, but through Governor Abdulaziz Yari. Back to the crux, the simplicity and sincerity of heart and purpose of President Muhammadu Buhari are indeed legendary.

It is possible that he called the meeting to inform the governors on the need for them to continually think outside the box in confronting the numerous challenges we are faced with, hence the aspect of the statement that stated that “we have to come together, think and rethink on the way forward.”

And not just that, there was a critical part of the statement that the word merchants have decided to downplay for political reasons, which was how the President’s tongue lashed the governors for failing to pay salaries and what led to the introduction of bailout funds to states.

Governor Yari admitted that “When Mr. President came on board, 27 states out of 36 could not pay salaries some for 13, 12, 8, five months respectively.

Our first encounter with him, he told us that we have no business of being in power if we cannot do the basic, that is pay workers. So he asked that we discussed how we could support those states that cannot pay salaries so that workers will be paid.

Those in the position they came up with the idea of bailing out the states so that they can pay the arrears.” That is the quintessential Muhammadu Buhari who listens and carries all along. In my opinion, it is possible the meeting was held for strategic reasons to encourage the governors to always live up to expectations by thinking and deploying proactive measures in ensuring that governance is not put on hold for flimsy excuses.

This is my opinion. And I very much doubt if the president would call a meeting to say that “the economy is in bad shape.” But again, we must come to terms with the fact that we are in a society where sensational news reporting is the order of the day.

And let us assume that the president said the economy was in bad shape to the governors, the question would why did the president call for the meeting and why did he say such?

As an expert in Strategy Communications , I know for a fact that nothing happens in a vacuum. There must be a reason. And that reason, in this case, may be due to the profligate nature of some governors.

Also, my interpretation of the statement credited to the president is that of a warning than admittance. It’s possible that the president wanted to use the medium to remind the governors, especially the profligate ones that it is not yet Uhuru and all hands must be on deck. Just maybe.

But trust us to always turn things upside down. In truth, I wasn’t surprised by the reportage of the event because its election period again, and all manners of spanners are freely thrown not minding the implications. In all of these, I think it would be morally deficient for anyone to want to crucify President Muhammadu Buhari while sparing those that brought the country to its knees even in the midst of enormous revenue.

It is also insulting and despicable. In all of the ensuing drama, Governor Abdulaziz Yari said: “the president talked to us in a manner that we have a task ahead of us, we should tighten our belt and see how we can put the Nigerian economy in the right direction.”

And for me, that is the crux and not what words merchants want the members of the unsuspecting public to believe. And since when has, it becomes a crime to charge people to higher productivity?

Rep Members Who Will Not Return To The House In 2019