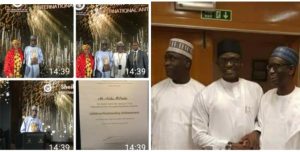 Malam Nuhu Ribadu the anTicorruption star is celebrated beyond but not by the government of his state.

The Daily Hint reported that it was a season of celebration following Ribadu’s exceptional achievements in fighting against injustice, corruption and diversion of public funds to have earned him a “life time” international anti corruption award.

The award, which was administered by Doha, Qatar-based thin- tank, Rule of Law and Anticorruption Centre (ROLACC), that celebrated corruption fighters, academics and campaigners from around the world, held on Friday December 7, 2018 at the Putrajaya International Convention Centre in Malaysia, with Malaysian Prime Minister, Mahathir Mahamad, and the Emir of Qatar, Sheikh Tamim Al Thani in attendance.

Sheikh Al Thani, as was widely reported, instituted the award in support of the United Nation’s anticorruption drive.

Celebrating the success, President Muhammadu Buhari was widely reported to have congratulated the anticorruption tsar for the giant integrity stride and Nigeria as a whole.

Malam Nuhu Ribadu, the Presidency noted, was a personification of the achievement in the war against corruption that the APC led government has been engaged in.

Ribadu himself has assured that he would be Buhari of Adamawa if mandated to run the affairs of the state during his declaration of interest for Adamawa state gubernatorial race under APC.

However, the primary election, faulted for irregularities, without any air about transparency, was said to have schemed Adamawa out of good governance.

The “life tume” anticorruption award being conferred on the pioneer chairman of the Economic and Financial Crimes Commission (EFCC) Nuhu Ribadu, the Daily Hint reported, was honoured by APC, Thursday at a dinner.

Social critics have however lamented that they have not heard or read anywhere where the Adamawa government congratulated the son of the soil for the honour done to his father land.

“It’s not an understatement, even if the Adamawa government has issued a press release signed to that effect, it was grossly underreported.

“I hope the media aids to governor Bindow or the principal himself, can clear the air on the matter,” a social critic in Abuja,would argue.

Malam Nuhu Ribadu, the Periscope Global Investigate will report, is a unique philanthropist as politician who will not want to brag about his personal contributions as a corporate social responsibility to his community.

“We’re missing a man to have been a rare governor Adamawa would have had. A man who see to the welfare and needs of downtrodden, “A man whose family were on admission receiving treatment at a health facility would lament.