* As a leader, l know that discharging such responsibility is equal or even more rewarding than a prayer, so in order to ensure that the right of my workers are settled I forgo the Friday prayer – Bindow 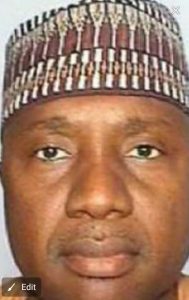 Governor Muhammadu Umaru Jibrilla Bindow of Adamawa State was today caught up in an unprecedented meltdown when he claimed that God would reward him abundantly for abandoning Friday prayers to be able to offset outstanding salary arrears of local government and primary healthcare workers.

In a live Hausa radio programme aired on the state owned radio station, anchored by the controversial on air personality, Mallam Adamu Katakore, Bindow claimed that he could not observe Friday prayers because of his quest to ensure that all outstanding local government workers salaries consisting of health, teachers and local government staff have been settled.

“I could not observe Friday prayers because of my quest to ensure that all outstanding salary arrears of local government workers have been settled.

“I know God will compensate me with even a greater reward for insisting and ensuring that the local government workers consisting of teachers, health and local government staff are paid their outstanding entitlements.

“As a leader, l know that discharging such responsibility is equal or even more rewarding than a prayer, so in order to ensure that the right of my workers are settled I forgo the Friday prayer but I have made amends by observing Zuhr prayer instead,” he said.

It may be recalled that as a last measure to offset the backlog of local government salary arrears, the state government secured a loan facility from UBA to the tune of N5billion sequel to the endorsement of the state house of assembly.

The grant of the loan request has generated considerable public opprobrium with many concerned citizens asking the governor to account for the revenues that the state generated since the inception of the administration about three and half years ago.

Payment of salaries at the local level became epileptic after Bindow straddled the reins of power as various local government workers told our correspondent in confidence that they received their salaries on regular basis before the advent of the Bindow administration.

“The governor was being economical with the truth when he claimed that he inherited a backlog of local government salary arrears because we used to receive our salary as and when due before the coming of this administration,” a health worker told our correspondent in confidence.

Another health worker, similarly confided in our correspondent that their travails in respect of non-payment of salaries started when Bindow commenced a dubious staff verification exercise that culminated in relieving the Adamawa state primary health care development agency from the duty of payment of salaries of health workers’ in the state as the government said it would switch to e-payment to block observable loopholes.