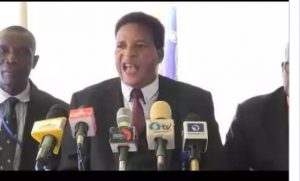 The President General of Global Peace Movement International (UK), Dr Mike Uyi, has come out hard on the Nigerian National Assembly over the conducts of its members towards Nigeria’s President, Muhammadu Buhari, during the presentation of the national budget on Wednesday in Abuja.

The group said the action of some members of the legislative arm of the government was not only shameful to the nation, but a big disgrace from the legislators against Nigeria, its people and the international community.

Speaking exclusively to meshackdaily.com in a strong worded statement made available on Thursday, the Global Peace Movement International President said by their action, that the legislators have successfully reminded the world of their continued activities that had held back the hands of Nigeria’s development.

According to him, the lawmakers have violated the basic, fundamental and human rights of President Muhammadu Buhari by their action, even though the rights to protests are allowed in almost every constitution in the world.

Dr Uyi said President Muhammadu Buhari should have been completely allowed to start, finish and present the budget of the year to them and to the world, before they decided to go on rampage and displaying their ignorance to the watching world.

He said maturity and wisdom were great virtue that seemed to be lacking with the legislators, pointing out the legislators didn’t show good example to the youths and upcoming leaders that could be imbibed or embraced. It’s rather so embarrassing.

“It is not enough to say that people fight and protest in the British parliament and the American senate. Nigeria is not the UK or the USA. There are better things to imitate from the UK and the USA such as welfare system, employment.

“What the national assembly is fighting for is shameless and not in the interests off the Nigerian people”, Dr Uyi said.

Insisting that the actions of the legislators were shameful, Dr Uyi said Global Peace Movement International has already set up its Anti-Election Violence and Anti Vote Buying Units in the group in London, adding the dossiers of all the contestants are already in the possession of the organisation and its affiliates in 157 countries of the world.

It could be recalled that Global Peace Movement International was the only international human rights group invited by the government of Iraq over its quarrel with the United Nations over the Food for Aid programmes in the 1990s.

The group has been involved in all forms of conflicts management and resolutions from Cape to Cairo and from China to America. Its headquarters is in London, the United Kingdom.