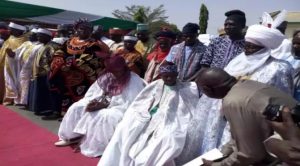 In his quest to give hope to oppressed communities and respect for traditional institutions, the Taraba state Governor, Darius Dickson Ishaku has again presented staff of office to one second class chief and eight third class chiefs.

At the presentation ceremony, which took place at government house Jalingo, Ishaku said that traditional institution is integral component of his administration because of it’s long history.

Ishaku, promised to support traditional rulers to ensure they satisfy their subjects through effective leadership and warned that he would not take it likely with any ruler who would want to breach the peace in their domain.

Darius, urged the royal fathers to play fatherly roles that is expected of them and tasked them to report suspicious persons in their domain to designated authorities.

Earlier, Permanent Secretary Bureau for Local Government and Chieftaincy Affairs, Bello Yaro, appealed to the royal fathers and Tarabans to reciprocate the governor’s kind gesture by ensuring that peace, unity and cohesion reign among their subjects.

The Permanent Secretary further advised those who could be aggrieved to follow legitimate means of seeking redress but not through violence.

The State Chief Judge, Josephine Tuktur administered the oath of office and allegiance to the chiefs.