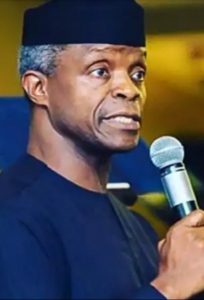 Vice President Yemi Osinbajo, on Saturday, restated that the victory of President Muhammadu Buhari in the 2019 presidential election would guarantee the South-West a shot at the Aso Rock Presidential Villa in 2023.

Osinbajo, who went on a house-to-house campaign in Oyo-Alaafin and held a 45-minute closed-door meeting with the Alaafin, Oba Lamidi Adeyemi, said the 2019 presidential election mattered to the Yoruba people of the South-West because the region had a larger interest in 2023.

The vice president was accompanied to Oyo by Governor Abiola Ajimobi; the APC governorship candidate in the state, Chief Bayo Adelabu; a former Senate Leader and the APC senatorial candidate for Oyo Central Senatorial District, Senator Teslim Folarin, among others.

Osinbajo eulogised Oba Adeyemi for his wisdom, which, he said, was second to none in the South-West.

He said, “My visit to Kabiyesi today is a homecoming. I have never seen an Oba with the political sagacity like the Alaafin. I know this is God-given because no university teaches that.

“Kabiyesi is a man of integrity; that’s why we are following and consulting him. Everybody here will agree with me that being a Yoruba leader is not easy. That’s why leaders like Senator Ahmed Tinubu consult him in our country.

“We have to look forward to that; that is before us. Though there could be some challenges, but what I know about President Muhammadu Buhari is that he is an honest man. If he says he will do something, he will do it.

“If you love Nigeria, you will vote for Buhari. Corruption is the reason Nigeria is not growing, a reason why they don’t want Buhari. They are out again; they are looters. Don’t allow them.”

Osinbajo added that what the Buhari/Osinbajo presidency had been doing was to build a solid foundation for Nigeria’s actual development.

“If you want to build, you need a solid foundation first. What we are building will be good to position Nigeria for eventual development,” he added.

Also, Ajimobi urged the people of the state to vote for the APC in the next elections.

Ajimobi said, “Kabiyesi is instrumental to the success and the development we have recorded during our administration. He is a master of administration. Unarguably, this is the most ‘intellectually-intelligent’ Kabiyesi in Yorubaland.

‘The PDP and other parties do not care about the masses. These are the people and the party (APC) that are taking care of the masses.”

The Alaafin, while welcoming the vice president and his entourage to his palace, admitted that the administration of Ajimobi restored peace to the state.

While offering prayer for the vice president, Oba Adeyemi said the visit to his palace was an important step of the Buhari/Osinbajo administration.

The vice president, who had, earlier in Ibadan, the Oyo State capital, inaugurated Shared Facilities for Micro, Small and Medium Enterprises, financed by the Bank of Industry, declared that the project was a Federal Government project in collaboration with the state government.

The shared facilities centre is for fashion, style and shea butter producers, who could not afford the cost of buying the equipment in the open market.

The Managing Director of the BOI, Mr Olukayode Pitan, lauded the project, saying shared facilities would operate as one of the National MSMEs Clinics and adopt a Public Private Partnership model to guarantee success and sustainability.

Osinbajo, who noted that small scale enterprises played significant roles in the economic growth of the nation, called on traders to support Buhari’s re-election bid to enjoy more of Tradermoni, which is meant to support small scale traders.