* A man behind the establishment of college of nursing and midwifery Yola, the state medical store and he who initially proposed for a medical college 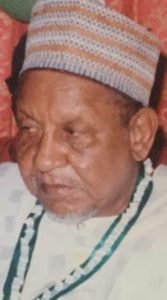 It is exactly 5 years; December, 22 when his maker our Creator willed that we would mourn over the transition to great beyond for a final rather eternal rest, after having served rather selflessly, the humanity; a blessing to his community and a pride to his country.

Dr. Muhammadu Aminu Tukur of blessed memory; a father, a guide and guardian with guaranteed goodness, was the first Medical Doctor Adamawa and Taraba under the defunct Gongola state could get to produce.

The next set of medical doctors the state could get to be blessed with was recorded about five years later. What an interval?

This is rather a silent achievement that ought to be recognised however posthumously.

For scholarship, professionalism and humanitarian services, Aminu toured round the world, simply to be able to make impact in his community and by far his country.

The man of intellectual integrity, who held tenaciously to the tenet that corruption has it roots traceable to stealing answers in classroom, had no business claiming the school he did not attend or the knowledge he did not acquire as much as he would not enrich himself by siphoning from the public funds, inviting with symphony for destruction.

Dr. Aminu would tell his children and their friends, the category I belong as a family, that certificate forgery is the worst of all irresponsibility bereft of blessing knowledge could get to offer. It breeds deception, lies, false promises and betrayal of trust among other forms of injustices, hence a taboo capable of inflicting a community led by certificate thieving, with unpardonable rather incurable and hardly managed plague of retrogression, clueless and irresponsibility in governance.

The intellectual Aminu had no business where certificate forgery thrived. He would not want to have his state degenerated into republic of liars as he would legitimately write for those who, William Wordsworth in his poem, “Michael” would say, “will be his second selves” when he’s gone.

Dr. Aminu therefore, had his GCE in 1956 having the original certificate bearing his name. LMS Nigeria in 1963. He was a fully registered medical practitioner having obtained DTM and H England in 1971, then DTPH University of London in 1973 and Nigeria Top Management Certificate at Bookings Institute USA in 1978.

Dr. Aminu was redeployed to Jalingo Medical Area from 1965 to 1967 before being assigned to head the medical team at Otukpo during the Nigerian civil war from 1967 to 1968.

for general administration, between 1976 to 1984, Dr. Aminu was redeployed to four ministries in his capacity as permanent secretary, these were, the ministries of health, agriculture and animal health, land and survey and commerce, trade and industry.

it is therefore on record, without being indicted for any criminality in public service, Dr. Aminu had made a mark in the following performances

Dr. Aminu implemented the following capital projects between 1976 to 1984:

* Establishment of new general hospitals in Bali, Zing and Michika.

*Establishment of College of Nursing and Midwifery Yola, the state medical store and proposed for a medical college.

The pioneer medical doctor would not insist that his children must take after his profession. He would however give them moral training, sound education, effective and efficient leadership skills to remain incorruptible and maintain the legacy of justice, trustworthiness and worthy faith that prayer first before anything; “worship and work.”

He would remind those whom he had mentored, to commit the professional practice to prayers, seeking for divine guidance and that there’s no activity that’s better than or even equal to prayers, which must be observed at its appropriate time even on sick bed.

Dr. Aminu of blessed memory the pioneer medical doctor the man behind the establishment of college of nursing and midwifery Yola, the state medical store and who initially proposed for a medical college, indeed ought to be immortalised by the state by having either a health facility or institution named after him.

May Allah SWT forgive his weaknesses, reward his good deeds, blessed the family he has left behind and grant him jannatul firdaus