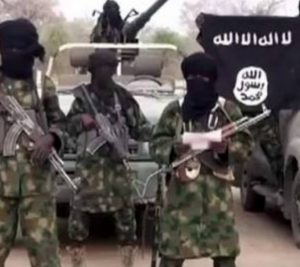 A resident of the village, Babagana Zannah, who fled into the bush for his safety told Neptune Prime via phone conversation that “the insurgents came in and went straight to a military formation located in the village.

“However, no soldiers were around, possibly having received prior information of the advent of the insurgents…but we also saw a tick smoke from our hiding place.”

The insurgents also went to the village’s clinic and later on set the facility ablaze.

The attack on the town has forced many locals into nearby bushes with some running into Damaturu.

Reports indicated that the Orderly was killed when the convoy he was with ran into the insurgents. Some drivers turned back while other people dropped from their vehicles and started running for safety. The Orderly, who was wearing his Police
uniform, was sighted by the insurgents who gunned him to death.

There was no official statement from the military authority confirming the attack as of the time of filing this report,