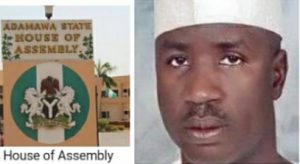 The political imbroglio rocking Adamawa State house of assembly has taken a new twist as the new leadership dissolved all standing committees and gave the sacked leadership an ultimatum to return all assembly properties including cars or face their wrath.

Giving the order during the house plenary session Monday, the new deputy speaker of the house, Lusambani Dilli, who superintended the plenary, said the new leadership change was not as a result of bad blood but effected in line with the assembly’s dynamics.

“All vehicles in position of those lawmakers impeached, should be returned to the house before official closing hours of today.

“The security should be involved,where necessary to facilitate the retuning process of the vehicles and the belongs”.

Leading the protest, the embattled deputy speaker, Emmanuel Tsamdu said the constitutional requirement needed to effect their removal was not met as only 13 members signed the document, noting that the action was null and void.

Countering the standpoint of Tsamdu at a session with newsmen shortly after the plenary, Dilli noted that 18 members actually signed the document, noting that with such development, the removal of the affected persons remained sacrosanct.

He noted that the members who were challenging due process invalidating the action, equally emerged through the same legislative process that saw them to the position they were impeached. Therefore, they lacked the moral ground to protest.

Leadership reporter reports that all the lawmakers that were impeached were absent at the plenary session.

Hon. Sunday Peter, the new spokesman for the Assembly, said the lawmakers at the plenary, confirmed the adoption of the new house leadership through vote of confidence.

Peter described the action of the lawmaker as democracy in action, inline with section 91 sub section 2 of the constitution.

“It is a normal happening in the legislative arms, to change the house leadership when the need arises”. He added

Some of the members of the committees affected, are Committee for Local Government and Chieftaincy Affairs, which have Alhassan Hammanjoda as chairman, Saleh Abubakar, Sunday peters and Mohammed Mutawali as members.

Housing and Urban Development, is to be chaired by Adamu Usman chairman, and Joseph Ayuba

Hassan Barguma is to over see Border and Integration while planning commission is to be headed by Sunday peters among others.