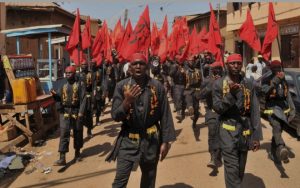 Commenting on behalf of the group, the leader of the delegation, Isa Mshelgaru of Building Department, Faculty of Environmental Design, Ahmadu Bello University (ABU) Zaria, said the visit was to strengthen relationship between the two faiths.

Mr Mshelgaru said the visit was meant to further boost the bond of relationship between the followers of two faith toward fostering national unity.

He observed that going by the tenets of the two major religions in Nigeria, non of them preached violence, adding that they both preached peace, love, unity and joy.

He described Christians as the closest people to Islam but lamented that Nigerians were divided by selfish politicians who hide under religion to achieve personal desires.

“Killing one another is an imaginary life; in the actual sense it does not exist; we are all created by one God, we must therefore, endeavour to live together in peace with one another.

“We should share joy, happiness and sorrow together. Our leader, Sheik Ibrahim El-Zazzaky said we should learn to live together in peace.

“When we are united as Nigerians, nothing will break us apart and nothing will go against the peace of the nation, not even Boko Haram nor militants or any other thing else.”

Responding, the Parish Priest, Michael Ibrahim-Bazai, expressed appreciation for the visit, describing it as the first of its kind.

He said: “We are happy to receive our brothers and sisters from Islamic faith here in our Church to celebrate with us today on 1st January 2019.

“It is true that sometimes we are scared of each other, this is because some of us are ignorant of the religion but we are all one.”

Mr Ibrahim-Bazai stressed the need for followers of the two religions to always practise their religion according to its tenets to pave way for peaceful and harmonious relationship.

He encouraged the two faith to respect, accommodate, embrace and tolerate one another towards building a stronger society and by extension, a stronger nation.

The priest lauded the frantic efforts of the movement for rescuing and providing medical treatment to some Christians during religious crises in Zaria and urged them to sustain the tempo.

He sought for consideration of Christians in areas of admission quota, especially in some professional courses in ABU as well as consideration for job vacancies.

The News Agency of Nigeria (NAN) reports that the visitors were hosted to a lunch and refreshment at the Church premises.