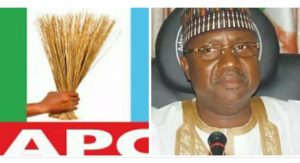 The preparation is on top gear. Hon. Alkali known as PA, the lawmaker representing Yola North LGA in Adamawa state House of Assembly one of the said close confidants of governor Bindow, is said to be at the top of his spirit preparing the venue at Ribadu square.

Alkali is said to have already invited the Kanny kind musicians to play the wood at Ribadu square, Tuesday for entertainment.

The Periscope Global Investigate will reveal that there was no campaign manifesto for the APC gubernatorial candidate during the 2015 electioneering atmosphere to have taken a queue from.

The only manifesto then, however unwritten and informal, was to chase PDP out of governance with the “APC Sak” slogan championed by President Muhammadu Buhari, with the view to ending insurgency in the northeast.

Ribadu square in Yola, was overstretched beyond estimation. PMB, confidently presented, by raising Bindow’s among other hands, soliciting for votes from the teaming electorates that have eventually, hearkened to the call for the APC Sak.

This is 2019, the likes of Dr. I’m Bindir the SSG Adamawa state, as is revealed, will not do the Umaru Bindow without having a campaign manifesto.

The Bindirs could be perceived as being too bookish with due process even in times of campaign. They could however argue for moral sensibility, however elitist the narrative.

What is its current position; whether or not Bindow for social change philosophy has had any significance?

What is the possible or probable promises, against problems for the the next four years, beginning from 2019 as a defined the next level?

Whether or not there’s the spirit within the form with the campaign manifesto, should be a case to be determined by the electorates after Tuesday, when the court of law could have decided the electioneering compass to be contained in the court order.

There’s a hearing Wednesday, before the court of law, on the legitimacy of governor Muhammad Umaru Jibrilla Bindow to join the gubernatorial race. Whether or not he will be able to defend the allegation relating to certificate forgery.

There’s already an impression that President Muhammadu Buhari will not be visible at the APC Gubernatorial campaign, Tuesday in Yola.

“APC gubernatorial flag off campaign without Baba Buhari, makes a metaphor. It can be subjected to different interpretations,” a political analyst would articulate.”

could 2019 APC gubernatorial flag off campaign, Tuesday in Adamawa state ever intimidate other gubernatorial aspirants with the opposition parties?

What gives the impression that PMB may be unavoidably absent at the APC gubernatorial flag off campaign, Tuesday in Yola?

This takes another rather investigative story, as we set our satellite in search of news out of events at Ribadu Square Tuesday.