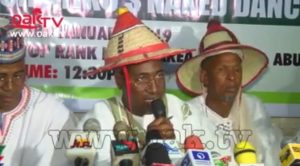 Miyetti Allah Kautal Hore organisation has joined the popular call with the other Fulani Ethnic groups on Nigeria, in defence against injustice, oppression and exploitation, to challenge Amnesty International Report on farmer – herdsmen conflicts in Nigeria as having a jaundiced legitimacy and kwashiorkor tommy of bias, occasioned by obnoxious falsification of facts. misrepresentation of situation and misinterpretation of findings it claimed to have duly researched on.

The report, the Miyetti Allah argued, was a thriller in fictional elaborative terms, lacking any air about merit to be honoured because it was based on biased kind of one-sided report aimed at dehumanising the Fulani race to be submitted to stereotyping, subjected to subjugation and at worse, accounting for annihilation.

In a press conference the Miyetti Allah Kautal Hore, represented by Alhaji Saleh Al- Hassan the National Secretary, accused the Amnesty International Report of being masterminded by the enemies of unity, peace and progress who would hate to have the country survive on sustainable mutual coexistence, against crises and other forms of insecurity.

The Miyetti Allah leadership has tasked the federal government to strictly monitor the activities of Amnesty International in Nigeria, more particularly, its sources of funding; whether or not it was pregnant resulting from the intercourse with the desperate politicians struggling to uproot the spirit of nationalism, unity in diversity and the universality associated with peace.

Miyetti Allah, having condemned the former vice president Atiku Abubakar the PDP presidential aspirant, with those around him who enjoyed feasting on Fulani hate speech as delicacy, has called on HRH the Lamido of Adamawa to strip Atiku of the Wazirin Adamawa, a title, the group argued, reserved for the worthy and non shadowy Fulani nobility.

The Fulani, both men and women interviewed in Taraba and Adamawa states, revealed to the Periscope Global Investigate that the Miyetti Allah’s has reflected the collective perception and position of the Fulani in the country.

Below is the full text of the position of Miyetti Allah at the Press Conference:

Our organisation; the Miyetti Allah Kautal Hore, was invited by Amnesty International at the presentation of a report they did on the clashes between farmers and herders titled, Harvest of Death: Three Years of Bloody Clashes between Farmers and Herders.

After an emergency meeting of our organisation, we went through the reports and here are the resolutions from what we saw in the report.

After a thorough review of the Amnesty International report on the conflicts between farmers and herders in Nigeria, we have found out that substantial part of the report is not only false and sedated statements but also written to satisfy their pay masters…

Amnesty International hired researchers, did not seem it fit to interview the leadership of the herders from most of the communities affected by the conflict they claimed to have visited.

From the hasty conclusion of the report, which was quick to dismiss efforts of the security agencies in ending the conflict, suggested clearly, that Amnesty International activities in Nigeria, have been hijacked by mercenaries and mercantile characters that are sponsored by forces that want to vulcanize the Nigerian state.

It is on record that our organisation has collaborated with security agencies in finding solutions to the farmers – herders conflicts. Hence, we are calling on the Nigerian government to closely monitor the activities of Amnesty International in Nigeria; particularly, their source of funding.

Consequently, as a result of this report, desperate politicians; particularly Atiku Abubakar the candidate of PDP the leading opposition party, is lighting on this false Amnesty report, with the hope of garnering political capital from the farmers – herders conflicts and the plight of the Nigerian pastoralists.

So, we call on our members and peace-loving Nigerians not only to condemn Atiku Abubakar for the self-hate and naked dance in the market place but to totally reject him as presidential candidate; as his intentions are inimical to the development and peaceful coexistence of the country.

We blame former President Olusegun Obasanjo for hoisting a shadowy character like Atiku Abubakar as vice president on the nation and now trying desperately, to bring him back as president.

We are equally calling on HRH the Lamido Adamawa to strip Atiku Abubakar of his title as Waziri Adamawa for his open hatred for the Fulani pastoralists and surrounding himself with ethno centrists and hate speech merchants that have been profiling the Fulani race and calling for their genocide.

The title of Waziri in Adamawa Emirate should be reserved for only Fulani sons with track record of helping and protecting the Fulani race and not shadowy character with conflated identity.

We are consequently, directing all our members nationwide and other Fulani groups, to embark on massive campaign against the presidential aspiration of Atiku Abubakar because, he does not mean well for the pastoralists and the country at large.

Finally, we appeal to HE President Muhammadu Buhari to instruct the security agencies to monitor Atiku Abubakar, considering his volatile and inciting statements he made against the herders.

His statements as a presidential candidate, is capable of destabilising the country; especially, considering that he is currently surrounded by anarchists and hate speech merchants, feeding on the lucrative industry of fake news and ethnic heridentism.

Sister organisation the cattle breeders, endorsed President Muhammadu Buhari. I believe it was a right decision and for us also, we cannot shy away from supporting a more credible candidate at the era where we are fighting corruption, we cannot be enforced corruption by supporting a perceived corrupt candidate.

So absolutely, our organisation is in total support of Mr. President to continue to do the good work he is doing in the country.

Buba Galadima and co. want to play the gods