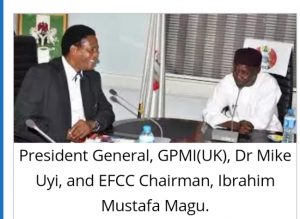 International human rights group, Global Peace Movement International (UK), said it has written to the British Prime Minister, Theresa May, calling for the immediate extradition of Nigeria’s former minister of petroleum resources, Mrs. Dieziani Allison Maduekwe back to Nigeria from the United Kingdom.

The organization which said it has been in the vanguard of the promotion of accountability, good governance and the rule of law in Nigeria; other parts of the African continent and 24 countries in Europe and Asia, said also that the United Kingdom should accede to the request, so as not to be seen as condoning and supporting corruption and its perpetrators.

President General of the Group, Dr. Mike Uyi, told meshackdaily exclusively in Washington DC, that his organization which has for over two decade been involved in conflict management and resolution, peace and capacity building for public and private officials, and the quest to promote anti-corruption activities in Nigeria and other parts of the world, is worried that many of those involved in the looting of Nigeria and the corrupt enrichment of themselves and families at the expense of development and the people of Nigeria are hiding away in several countries of the world, including the United Kingdom.

“Of particular worry is the case of the former minister of petroleum resources, Mrs. Dieziani Allison Maduekwe, who has been found wanting of corrupt enrichment and practices, and whom sadly, has taken refuge in London and vehemently refused to respond to calls to account for her alleged misdeeds while in office as minister of petroleum resources”.

According to the GPMI (UK) President General, it is on public and private records that the current government in Nigeria has made the war on corruption in Nigeria a priority.

“It is on records that the Head of that Commission, the EFCC, Mr. Ibrahim Mustafa Magu, has done his utmost best to combat the scourge, and by our honest assessment, has done very well in that campaign, particularly in the recovery of looted funds belonging to the government and people of Nigeria, a situation that has made the people of that country extremely proud and happy”, Dr Uyi said.

He explained in order to ensure greater success in the war against corruption in Nigeria that Global Peace Movement International is calling on the United Kingdom to help in the extradition of Mrs. DIEZIANI ALLISON MADUEKWE, former minister of petroleum to Nigeria to face her corruption charges that runs into several billions of dollars.

“ By taking visible steps to support the calls for the extradition of Mrs. Dieziani Allison Maduekwe to Nigeria, the United Kingdom would not only have done the right thing, but would also be seen to have exonerated the country (UK) from allegations in certain quarters that the United Kingdom is tacitly in support of corruption and its perpetrators in Nigeria.

“Our call is based on the fact that no one person is above the law and the United Kingdom must not be seen to be supporting illegality in Nigeria, through overt support for the former minister by not sanctioning her extradition to Nigeria to face charges of corruption”, Dr Uyi added