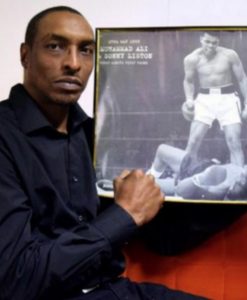 It is presumed that Ali’s nine children, and his widow, shared an inheritance of more than £50million after his death in June 2016. But Muhammad Ali Jnr says all he gets is a pitiful allowance from his father’s estate.

The 46-year-old says he was led to believe he would inherit about £4million of his father’s wealth, which would have put an end to the financial struggles he has suffered throughout his adult life. The one saviour is the £560 a month Ali jnr receives from the estate. It pays for a dilapidated roof over his head in Miami, Florida.

Ali jnr lives in a dingy room in a three-bedroom Miami condo, and Shakira and the children have to make do at her parents’ tiny attic in Englewood, Chicago, a violent, frightening neighbourhood with one of the worst crime rates in the whole of America.

It’s clear that Ali jnr received no windfall. He says he only moved to Florida to be nearer his mother, Ali’s second wife Khalilah Ali, and to try to pick up corporate and promotional work.

That didn’t work out. So now, to scrape together a few dollars, he hires himself out as an odd job man – cleaning out rubbish, painting, labouring or gardening – although in truth, it’s a rare event for him to get work.

Ali jnr says his father’s estate refuses to increase his monthly allowance – $700 (£560) for rent and a further $300 (£240) to live on. It’s not much, but he says that in reality he gets even less because he doesn’t have a bank account and has to cash the cheques at Moneygram or other stores that charge commission. He says that after paying that commission and his bills, he’s left with about $200 a month – £5.70 a day.

“My friend lets me use his truck and equipment and I give him half.

“But at the moment, I’m making nothing. I can’t get any business. People say, ‘You’ve already got money, why do you need it from me?’ It’s hurting me.

“I miss my kids so much. They’re living in her parent’s attic. My wife said I abandoned them and got millions, which was wrong.

“Even though I earn next to nothing, I’d love to send money back home for the kids or be able to afford a flight back to Chicago.”

Junior believes his siblings get more than him but he cannot know for sure – he says neither his stepmother Lonnie nor any of his brothers and sisters have been in touch with him in two years.

He says: “It makes me feel like crap but I deal with it, what else can I do?