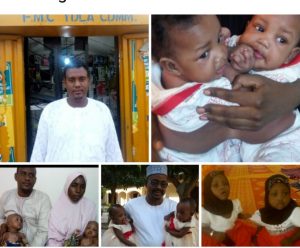 Muhammad Ramat 31 the father of Fatimah and Maryam the conjoined twins that were successfully separated last year, in FMC Yola, has renamed his business shop in Maiduguri, after the health facility.

Recall that the Periscope Global Investigate, reported that Fatimah and Maryam, presently one year two months old set of female omphalopagus twins delivered by cesarean section in Maiduguri on November 25, 2017 with a combined birth weight of 4.5kg, shared a single umbilical cord and were joined from the mid thorax to the mid-abdomen

The twins were transferred to Federal Medical Centre, Yola Adamawa state, Nigeria on March 25, 2018 to be separated.

Fatimah and Maryam, after six weeks of preparation, while they also added a combined weight of 11kg, were successfully separated on Monday, May 14, 2018 following a four hour surgical operation.

Fatimah and Maryam, having duly certified fit for, were discharged from FMC Yola on June 8, 2018 and were taking back home in Maiduguri, Borno state on June 9, 2018, being facilitated by the management of the hospital.

Muhammad Ramat 31 and Kellu Adam 28 are the parents of the amazing twins.

To show appreciation, Ramat the entrepreneur, the Periscope Global will Investigate, has renamed his business shop after FMC Yola.

Ramat, the about to he made in Unimaid, sells computer and handsets accessories in Bulunku market, Maiduguri, Borno state.

“I rename my shop, as you can see, to FMC Yola in appreciation of what good the management and members of staff of the health facility have done to my family.

“When we had a conjoined twins as our first issue, we were really confused; would they get to survive? How could we manage them?

“These were among the nerve cutting questions that frequently came to mind, when help came from an unlikely source.

“FMC Yola volunteered not only to separate our conjoined twins free of charge, our feeding, and accommodation, everything was given to us free In fact even transportation was free.

“Fatimah and Maryam are now one year two months old. they’re learning how to walk independent of each other. What can we say?

We thank Allah SWT for everything. We thank Prof. Auwal Muhammad Abubakar the Medical Director FMC Yola and his surgical team for raising our hope in raising our children,” Muhammad Ramat said.

“Our appreciation cannot really be quantified. We’re always putting FMC Yola in prayers for its success.

“As I’ve been saying, mine is more of soliciting, on behalf of FMC Yola, It’s not a prayer though. However, we could not be the only parents to have a conjoined twins that will require surgical procedure to be separated, free of charge as well.

“Therefore, this is simply to call on the government and well-meaning individuals, to equip FMC Yola with a hi-tech diagnostic facilities, to be able to carryout investigations within the hospital, to be able to provide succour to the growing number of indigent patients,” Kellu Adam the made in Unimaid remarked.

the Periscope Global Publishers is hereby also soliciting, on behalf of the separated conjoined twins for government and philanthropic intervention with a view to arming the twins with sound education to be able to repel against any instrument of mass ignorance, the type that has subjected their birth place to insurgency.

Kellu the mother of twins holds a BSc. Degree from Universality of Maiduguri. She could be gainfully employed to be able to assist in fending for the children.