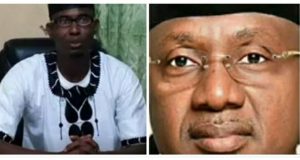 * Someone who claimed to be a policeman, working for the ADC to governor Bindow by name Adamu Banufe with phone number 07038721317 called me and threatened to kill me – Ribadu

*That’s why I swear. Not only you, Mustapha, even if it were Nuhu Ribadu who would go to the press, pressing charges against ADC, we’d not spare him. Now let’s go – Aid to ADC

Mustapha Atiku Ribadu the leader of the Black Cap Revolutionary Movement in Yola, known to be tough in challenging the alleged excesses of the state government, has petitioned against ADC to governor Bindow of Adamawa state to Inspector General of Police for joining politics against police ethics and for threatening his life

Ribadu accused the ADC of jettisoning his constitutional calling of being an unbiased umpire by putting the toga of politics, noting that the ADC has wittingly turned himself into a full bloodied political actor attempting to practicalise the fictional elaboration of gangsterism depicted in the Nollywood movies with violence as the thematic preoccupation; a threatening development to a peaceful state

“The man has simply removed the natural garment of an unbiased umpire and has decked himself in the toga of politics, making him to become a full bloodied political actor in the state.

“His involvement in politics was too deep to the extent that he became a major pillar of Bindow’s reelection campaign movement. A position he has been playing with gusto, making him to become a major player in the Adamawa political firmament, of course to the dismay of many obfuscated Adamawa people.

“As a duty, I was compelled to defend the group, which I painstakingly nurtured over the years from the incursion of some unscrupulous people who wanted to reap from where they did not saw.

“That basically set me on collision course with the ADC who was responsible for bankrolling the whole plan of dividing our team,” Ribadu said.

However, some governor Bindow apologists, led by one Dasin, drowsily dared the authenticity of what the apologists considered as fake news peddled by some media outlets, apologetic to the defeated world celebrated anti corruption tsar Ma Nuhu Ribadu, however the non romantic, investigative, human angle structured and professionally apolitical, the accused rather than excused media could be.

What brought about Malam Nuhu Ribadu for the Dasin group and the aid to Bindow’s ADC to the Ribadu hate speech as a theology to proselytise?

Recall that the Periscope Global Investigate, has on January 19, sought to find out the reason behind the allegation by the Black Cap Revolutionary Movement, of the interference of the ADC to Bindow, into the affairs of the movement; whether or not it could go for libel.

“Someone who claimed to be a policeman, working for the ADC to governor Bindow by name Adamu Banufe with phone number 07038721317 called me and threatened to kill me.

“It’s not about being afraid. But we’re not taking this lightly. Ignoring it, is tantamount to endorsing a smuggled anarchy in our peaceful coexisting state.

“We’re taking it to the appropriate authority with a view to tackling any tendency to hired assassination in our state.

“If you want proof, this is a recorded telephone conversation. Go and listen to it,” Ribadu said

The following is the translation of the telephone conversation between the claimed Aid to the ADC to Bindow Adamu Banufe and Mustapha Atiku Ribadu leader of the Black Cap Revolutionary Movement:

Aid to ADC: ADC is not a politician and governor Bindow is for everybody. He’s yours, he’s mine and he’s everybody’s.
Democracy has given you the right to comment on the governor or the president and anybody, under the cover of freedom of speech.
However, the freedom of speech does not give you the guarantee to challenge ADC publicly. He’s my boss. He’s a policeman and not a politician.
He’s however mandated by law to protect the interest of his principal, as much as I’m by law, mandated to protect his interest.
that’s why I called, to warn you never again should you write or go to the press to make any comment against ADC.

M Ribadu: My take is that ADC should desist from interfering in the political activities of the black cap.

M Ribadu: Listen to me now.

Aid to ADC: Go ahead.

M Ribadu: If ADC doesn’t stop minding his business with our black cap activities, I’ll not stop challenging him.

Aid to ADC: If you don’t stop challenging him, I swear to God, you’ll regret ever living…

Aid to ADC: OK. You’ll soon die. I swear, you’ll soon die, because whosoever could be, even if it would be Nuhu Ribadu who would step on ADC’s toes, to God…

M Ribadu: If ADC doesn’t stop minding his business, interfering in the political activities of black cap, I’ll not fold my arms.

Aid to ADC: That’s what I want to tell you… listen now…

M Ribadu: Isn’t the ADC a policeman? He should concentrate on his police duty.

Aid to ADC: Now I want us to draw a line, I swear, if you ever go to the media again or write any comment on ADC, I swear, you’ll not castigate anyone anymore.

M Ribadu: Will I die?

Aid to ADC: I didn’t say I’ll kill you but you’ll not castigate anyone anymore.

M Ribadu: If I’m not dead, I’ll not stop it, so long as ADC doesn’t stop interfering in the political activities of the black cap.
If his job is to protect the governor. then he ought to reduce his assignment to providing security to the governor only.

Aid to ADC: Now the dice is between you and I.

M Ribadu: What’s my business with you?

Aid to ADC: Whoever could be behind you, by the time I pounce on you, only God can intercede for you.

M Ribadu: I don’t know you and there’s nothing you can do to me.

M Riadu There’s nothing you can do to me.
So long as ADC doesn’t stop minding his business…

Aid to ADC: That’s why I swear. Not only you, Mustapha, even if it were Nuhu 7 who would go to the press, pressing charges against ADC, we’d not spare him. Now let’s go. End.

The Newshawk Monday, added that “it may be recalled that three journalists operating in the state have last year deposed a complaint before Commissioner of Police over attempt by state sponsored squad allegedly by a security man at government house to either kill or inflict grievous injuries on them over their critical reportage of government activities.”