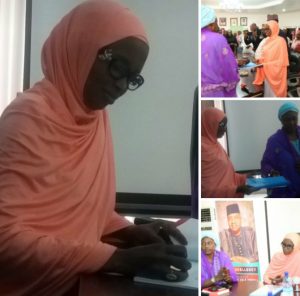 * A weighty worthy appointment, another kudos to Bindow – political analyst

Dr. Batulu is a staff with Federal Medical Centre Yola. Owing to her diligence and dedication to duty, Batulu served as chairman of so many committees and has proven to be functional enough to getting any dysfunctional system out of the maze for effective and efficient service delivery.

Dr. Batulu’s experience with Family Health International Fhi, would play an active role to her new assignment, as it would help in getting international donor agencies and organisations wooed to facilitating the activities of ASPHCDA.

In a handing over ceremony Monday, at ASPHCDA headquarters in Yola, Dr. Batulu, solicited for the support and cooperation of the management and staff of ASPHCDA, with a view to having an enshrined teamwork spirit for popular collective participation, to enhance efficiency and effectiveness.

Some members of staff of FMC Yola interviewed, separately, congratulated the government of Adamawa state for having Dr. Batulu accept the herculean responsibility as the new chairman ASPHCDA.

“Governor Bindow must be commended for considering the capacity and capability of FMC Yola to head healthcare agencies in the state.

“Recall that Dr. Abubakar Muhammad Sahabi consultant physician with FMC, is appointed by governor Bindow, some months ago, to head the Adamawa State Health Services Management Board.

“Governor Bindow has not only appointed staff of, he has also donated one 550 KVA generator to FMC Yola. The generator is estimated to worth over N100m.

“You see, the synergy in healthcare service delivery, between FMC Yola and Adamawa state government, does not end only in establishing rural outreach programme by FMC Yola for its postgraduate training in Jada general hospital and Hong cottage hospital.

“Dr. Fatimah Atiku Abubakar the commissioner of health Adamawa state, it’ll interest you to note, is a board member of the Federal Medical Centre Yola,” FMC Yola staff said.

A political analyst in Yola, observed that Dr. Batulu’s, was indeed a weighty worthy appointment, another kudos to Bindow for adding fillip to the diadem of his political scorecard.

The management of the Periscope Global Publishers, has joined in celebration, the congratulations and commendations session this season.

“Governor Bindow should be commended for the approval of appointment. Dr. Batulu Isa Mohammed the new chairman as well as the management and staff of ASPHCDA, should be congratulated for a worthy but weighty appointment.

“It is easy taking the path that is concretely built smoothly too, as much as it is difficult maintaining it.

“It is easy for once impact to be readily pronounced, having taken over from an inefficient, rather lazy hand. It is however challenging taking over from achiever.

“It takes courage for success, stepping into big shoes. However, Dr. Batulu for sure, is billed to succeed for not only starting with prayers, she also solicited for prayers, from every Godly angle,” The Periscope Global remarked.