Monarchy In Maiha:
Invitation To Contempt Of Court For A Book Launch 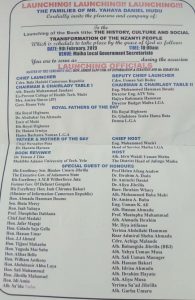 It was at the editorial board meeting. The lead editor, simply asked whether it was a draft the invitation letter meant for vetting.

The families of Mr. Yahya Daniel Hudu, invited people for the launching of what can be considered as their fictional narration in book form, they titled: History, Culture and Social Transformation Of Nzanyi People, scheduled for February 19, 2019 at Maiha local government secretariat.

The government of Adamawa, traditional rulers of Numan and Demsa chiefdoms, were among the dignitaries invited.

However, the invitation, as an end in itself, has denounced the credibility of the book for considering “Alh. Idris Wakili Usman Shehu as the district head of Jalingo-Maiha.

Shehu was appointed as the district head of Jalingo-Maiha by governor Bindow against due process.

Governor Bindow of Adamawa, for unfathomable reason, would not sign the court granted approval about 6 months after the ruling.

Shehu was warned against playing the impostor thereafter, as he was accused of, which degenerated Jalingo-Maiha into conflicts of identity and legitimacy of authority.

Shehu was said to be advised to register an appeal against the high court ruling, even though the jury was incorruptible.

There was a hearing at the court of appeal sitting in Yola and the ruling was said to have been slated for Tuesday January 29, 2019.

The question that is remained to be asked is; what gives the families of Mr. Yahya Daniel, the ground to be in romance with the contempt of court, thereby by dressing their host; Idi as district head of Jalingo-Maiha?

Hon. Commissioner of Information and Strategy, Adamawa state Alh. Ahmed I. Sajoh, was made one of the masters of ceremony for the book launch. I hope he’ll sort out the posers before going to the podium.

Monarchy in Maiha must get out of the maze.