ONNOGHEN: The Cacophony Of Justice And The Fate Of Nigeria 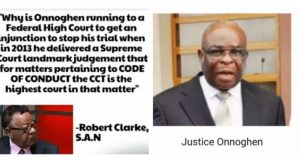 ***If you lay your hands on one of the News Magazine of 2000 it carried the headline, “105 corrupt judges in Nigeria” or something to that effect. None of the affected judges sued the magazine for libel. One of those judges is (the embattled Onnoghen) the present CJN. This is the price we pay for due process***

My little contribution is to assist the non-lawyers and independent watchers of current proceedings to distill the issues beyond the muddy waters being thrown up and about to achieve political ends.

By virtue of Nigeria’s colonial legal heritage, judicial precedents (decisions of the higher courts made on earlier cases) take a prime position in the determination of new cases on similar or related facts. The courts therefore rely heavily on the settled principles of the law in arriving at their decisions in subsequent cases.

There has been so much hullabaloo about and around the indictment of the eminent occupant of the office of the Chief Justice of Nigeria (CJN), in person of Mr Justice Walter Onnoghen. Understandably, the indictment occurring at a politically volatile period (less than 40 days to a vital presidential election) in Nigeria was bound to generate rowdy and opportunistic responses from legal minds and non-legal minds alike.

However, to help our objective understanding and analysis of the state of the law in Nigeria, recourse must be made to the causa celebre, that epic piece of judicial precedent from which all subsequent extrapolations should be made on the present scenario. That point of reference is NGANJIWA v. FEDERAL REPUBLIC OF NIGERIA (2017) LPELR 43391 (Court of Appeal).

The Honourable Justice A.O. Obaseki-Adejumo, Justice of the Court of Appeal (JCA) formulated the following principle in the Ngangiwa Case:

“It must be expressly stated that if a judicial officer commits theft, fraud, murder or manslaughter, arson and the likes,…WHICH ARE CRIMES COMMITTED OUTSIDE THE SCOPE OF THE PERFORMANCE OF HIS OFFICIAL FUNCTIONS [emphasis mine], he may be arrested, interrogated and prosecuted accordingly by the State DIRECTLY without recourse to the NJC (National Judicial Commission).

“.. These classes of criminal acts are not envisaged and captured by the provisions of PARAGRAPH 21, PART 1 OF THE THIRD SCHEDULE (to the Constitution).

“On the other hand, if any Judicial Officer COMMITS A PROFESSIONAL MISCONDUCT WITHIN THE SCOPE OF HIS DUTY and is investigated, arrested and…….subsequently prosecuted by security agents without a formal complaint/report to the NJC, it will be a usurpation of the latter’s constitutionally guaranteed powers under Section 158 and Paragraph 21 Part 1 of the Third Schedule, thereby inhibiting, and interfering with and…… obstructing the NJC from carrying out its disciplinary control over erring judicial officers as clearly provided by the Constitution.”

The simple question that all honest people of clean conscience must ask the coterie of Onnoghen’s Amen corner is: what is the category of Onnoghen’s wrongdoing?

Failure to declare his personal fiscal assets as statutorily required is a wrongful act OUTSIDE the performance of his duties as a judicial officer. His wrongful act was and remains a criminal offence for which the apparatus of State must act. The NJC has no role in dealing with that.

However, as I already mentioned, these are highly volatile and flammable times. Every action or omission of the Federal Government of Nigeria headed by Mohammadu Buhari will be turned into a weapon of mudslinging against Buhari’s electoral chances. That is the reason for all the pandemonium that has been unleashed on Nigerians these past few days.

Of course, the high volume of count-me-in SANs supporting the CJN will most likely sway the minds of innocent watchers into believing that there is indeed a vendetta against the CJN. There is none and there can be none.

The same Buhari confirmed Onnoghen as CJN despite all the opposing forces that felt he lacked the moral uprightness and integrity required for that office.

But we cannot be shocked or surprised by the outrage and outbursts of those opposed to the trial of a roguish CJN for his roguish act(s): they need him and his roguish system to perpetuate the distribution of judicial largesse and crooked elevations to the Bench and Bar in Nigeria. That is the way the Nigerian judicial and legal architecture now works in the larger part. Corruption oils the system…for those who run by it!

What more? The same judicial system created and nurtured by Onnoghen is the very one that will handle his indictment. Throw up a knife a thousand times and it will come down resting on its flat side. Why so much chaos when Onnoghen will carry the day in his own judicial system? What will however not go away is the moral albatross that will hang on his neck for the rest of his natural life. He’ll remain a tainted CJN regardless of how he ends his career.
In 1994 or so Justice Kayode Eso recommended some judges for dismissal or compulsory retirement. The names of those judges were sent to NJC which approved the recommendations of the Eso panel and sent the names of the judges to General Abacha for action. General Abacha died without taking action. General Abdusalami became head of state and set up another panel to review the matter. Most of the judges were absolved because due process was not followed. And what was that due process? The NJC before sending the names of the judges to General Abacha was supposed to have first sent the recommendations of the Eso’s panel to the affected judges for their comments. That was not done and on that basis judges who were described as “corruptible” and had appeared before the Eso’s panel escaped. Some of those judges were then High Court judges and somehow they rose to the supreme court. If you lay your hands on one of the News Magazine of 2000 it carried the headline, “105 corrupt judges in Nigeria” or something to that effect. None of the affected judges sued the magazine for libel. One of those judges is the present CJN. This is the price we pay for due process.