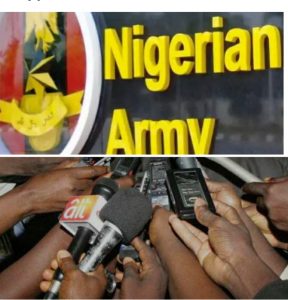 The Nigerian Army, in collaboration with the Nigerian Guild of Editors (NGE), Nigerian Union of Journalists (NUJ), Nigerian Institute of Public Relations (NIPR), Guild of Corporate Online Publishers (GOCOP) and Guild of Professional Bloggers of Nigeria (GPBN), organized a two-day Conference on the theme:

Chairman of the occasion was Chief Olusegun Osoba, the former governor of Ogun State who was represented by Professor Umaru Pate of Bayero University Kano.

The Special Guest of Honour was Alhaji Lai Mohammed (Minister of Information and Culture who was represented by the Ministry’s Permanent Secretary, Deaconess Grace Isu Gekpe);

Other participants were: the President of Journalists and Writers Foundation, New York and top members of Nigerian Academia, Media and notable Commanders of the Nigerian Army war against terrorism.

Professor Tonnie Iredia, former Director General of the Nigerian Television Authority delivered the keynote address. Thereafter, five other papers on different aspects of the theme were presented and discussed at the conference.

The conference recognised that the Nigerian Army and Media have complementary constitutional roles that bother on national security, information management, peace, and safety of Nigerians.

Therefore, the conference deliberated on how to achieve and sustain constructive, sustainable and effective interface between the two institutions in the discharge of their specific constitutional mandates, particularly with respect to the ongoing fight against terrorism and insurgency in Nigeria.

The conference commended the Chief of Army Staff, Lieutenant General TY Buratai for this laudable initiative. It also noted with satisfaction the high turnout, diverse representations and fruitful deliberations at the conference.

At the end of the highly interactive sessions, the conference observed as follows:

1. The fight against terrorism and insurgency is relatively new to both the military and media, resulting in occasional strains in the relationship between the two in the course of work.

2. The Media and military have been collaborating in the fight against terrorism and insurgency, however, there is no consensus on the challenges and expectations placed on each other.

3. The perceived posture of the military as the sole defender of national security often isolates the media and the attitude of some of the media, breeds mutual suspicion and weakens the needed collaboration between the military and the Nigerian media.

4. Improper handling of strategic information could amplify activities of terrorists and insurgents, spread fear in the citizens, jeopardize military plans, and dampen troops’ morale, thus, inadvertently guarantee additional financing and recruitment base for the insurgents.

5. Publication of unverified information on social media or the conventional mass media may constitute threats to national security and unintentionally promote terrorist propaganda, reveal military strategies, and jeopardize the safety of military personnel.

6. Freedom of expression has constitutional limits when it poses clear threats to national security.

7. Media reportage shapes perception about Nigeria and Nigerians internationally. Therefore, caution is required, considering the implications of such reports.

8. The military – media relations should not be seen along the line of material or financial inducements.

9. There is the need to know and understand that the media, military and indeed all Nigerians are under threats from the terrorists and their activities.

11. In reporting terrorists’ activities, political and security sector players often disturbingly see some media organizations as apologists of the terrorists.

12. Some media owners, knowingly or unknowingly, influence news reportage of insurgency to push political or economic interests at the expense of national security.

13. The National Orientation Agency (NOA), is not fully involved in managing the perception of the populace regarding the ongoing war on terrorism and insurgency.

14. Social media serves as hotbed of fake news in Nigeria.

15. The number of credible online media content creators is low on the Nigerian social media space.

16. The indiscriminate posting of videos online by people purported to be in the employment of the Army has undermined the successes of the war on terrorism and insurgency in Nigeria.

17. A large percentage of the Nigerian youths rely on information from online sources.

Accordingly, the conference recommends as follows:

1. There should be regular information sharing and capacity building programmes like conferences and workshops between the top echelon of the Army, Media and strategic communications managers in order to enhance harmonious military-media relations in Nigeria.

2. The Nigerian Institute of Public Relations (NIPR) should work with other institutions to expand avenues for sustainable engagement, peer-review and consensus building with regards to their respective responsibilities towards ultimate success of the war against insurgency.

3. The practice of embedding journalists by the Chief of Army Staff since 2015 should be strengthened to promote better appreciation of the challenges and successes of the Army. However, embedded journalists should be allowed to independently gather information without perceived interference as that could breed suspicion.

4. Journalists should be professionally trained and continuously retrained for them to sufficiently understand the dynamic connections between media reporting and national security. This will keep them equipped on best practices on context sensitivity in reporting war against terrorism and insurgency.

5. The military should encourage communication between military and media chiefs/editors under the Chatham House rules.

6. National security supersedes all interests; however, its protection should be the shared responsibility of the military and media professionals, since terrorists are common enemies of the Nigerian State.

7. Strategic handling of reports of activities of terrorists and insurgents will decrease fear in the populace and weaken the recruitment and financing base of the criminals.

8. As an enterprise, the media should develop new and sustainable financing models in order to effectively discharge its constitutional responsibilities in the face of rising business challenges.

9. The war against terrorism, insurgency and violent crimes should always be appropriately framed as a war between Nigeria and the criminals, which affects every fabric of our society and not a detached war between the Nigerian Army and Boko Haram terrorists group.

10. Nigerian government and the Army should set aside funds to drive special joint military-media counter insurgency and strategic communications activities.

11. The Military should appreciate and support journalists to fulfill their constitutional mandates of informing the citizenry as well as respect journalists’ professionalism including the right to protect the confidentiality of their sources of information.

12. Media professionals need to improve public understanding that the Nigerian State is at war and that both the Nigerian military and media are focused on playing their crucial roles to win the war against terrorism.

13. The National Orientation Agency should be further empowered to aggressively re-orientate Nigerians and sensitize critical institutions on their respective roles in the war against terrorism.

14. In order to close any perceived information gap and mitigate the spread of fake news, stakeholders should crosscheck, fact-check and evaluate information received before publishing in order to avoid dis-information and misinformation.

15. The Nigerian Army should provide timely and accurate information in accessible locations including online sites for cross referencing of information on their activities related to the war by the media and other interested stakeholders.

16. The Nigerian Army should continue to educate its soldiers on the implications of resorting to unauthorized uploading of images and videos from the frontline.

17. Social media influencers and citizen journalists are strategic partners that the military can embed in their routine process of intelligence gathering and information sharing.

18. The Nigerian Army has been professional and is apolitical, a fact that has always been emphasised by the Chief of Army Staff Lieutenant General TY Buratai. There is the need, therefore, for media professionals to always ensure they do not allow grudges against civil authorities to translate to bad press for the military.